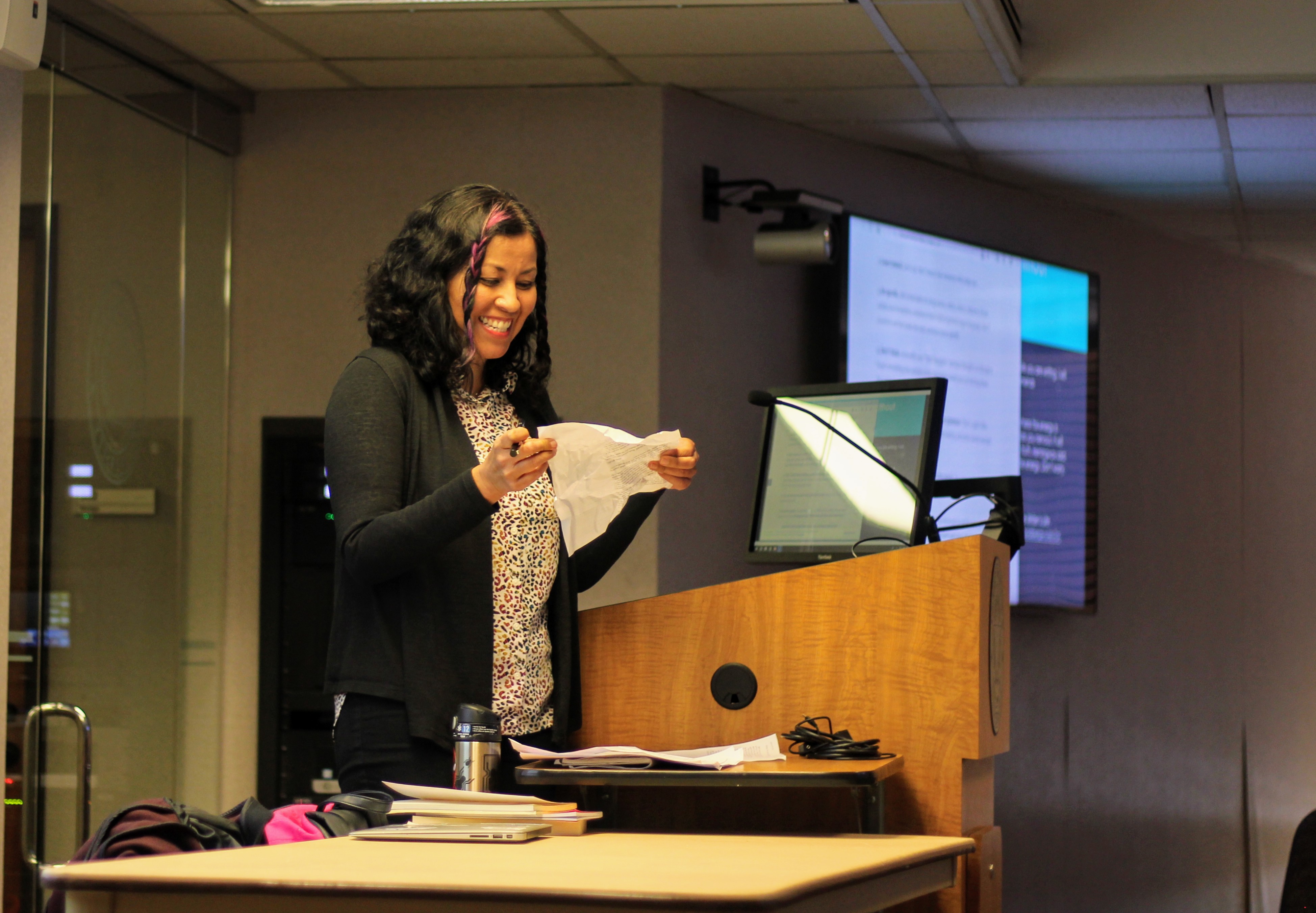 Silence fills the room as students focus their attention back to their notebooks, each of them channeling their anger as their pens dance across the paper. The room is heavy as each person draws inspiration from their own experience. Some people pause to wipe away tears or stretch their hand, but these are the only interruptions in the non-stop free write. Every few seconds, Emmy Pérez reminds the writers to, “go for the jugular.” Despite a packed room, in that moment, everyone is left to their own thoughts and emotions.

“I think that writing is a really beautiful thing that helps us know what we’re thinking and what we’re feeling,” Pérez said. “But it’s also an opportunity for us to imagine the future and to reenvision the past. If we’re writing about trauma, for example, we can revisit the trauma in our writing if we’re brave enough to do so and try to imagine a different future for ourselves.”

Pérez, the 2020 Texas Poet Laureate, hosted a social justice writing workshop, Q&A session and poetry reading on the Denton campus Nov 13. The workshop was aimed at teaching students how writing can be used to make a difference in their community.

Originally from Santa Ana, California, Pérez has lived in the Texas borderlands for 19 years.  She is the author of two poetry collections, “With the River on Our Face” and “Solstice,” and is currently working on her third. Her laureate term will begin in March 2020.

Pérez began the workshop by asking students if they had ever written as a form of activism, participated in movements or contributed to a movement by using hashtags on social media. Only a few raised their hands, so she encouraged students to look for issues in the community that they were passionate about and envision a scenario where they would be able to use their writing to impact the issue. This is known as literary activism, and it is the foundation of Pérez’s poetry.

She has participated in social protests and political demonstrations, many that revolve around issues at the border. Her poetry collection, “With the River on Our Face,” deals with major conflicts concerning immigration and violence.

“My work means different things to different people, but I hope ‘With the River on Our Face’ imparts some of the beauty of the Texas-Mexico borderlands through its lyric poems and moments,” Pérez said. “The work also witnesses policies that have been negatively affecting people, communities, wildlife, and more for many years now. At the same time, I hope the work helps readers think about their own communities and beyond.”

Throughout the workshop, Pérez held many freewriting exercises. She reminded the room of how powerful writing can be for yourself and community, which is why she encourages students to go for the jugular when writing or attack what makes them uncomfortable.

Later that evening, Pérez held a poetry reading and Q&A session that allowed attendees to get to know her on a more personal level. She opened up about some of the inspiration behind her poems and gave insight to her writing process. Pérez said that she started writing her second poetry collection when she saw one of the first walls being built in the borderlands.

“We’ve been reading her poems in class but hearing her read them herself — hearing any poet read their own work — always sort of recontextualizes it, especially the emphasis that they choose to put on certain words,” Murdock said.

Pérez said poetry is a great medium to discuss social justice issues because it invites expressions of feelings, thoughts and imagination in a compact form.

“Sometimes we have a more immediate experience reading a poem or hearing one performed than say a 20 page research paper on the same topics,” Pérez said. “Whether a poem is very direct or subtle about social justice, its density can carry it like a song that can resonate long after reading or hearing it.”

Featured image: Emmy Perez describes crumpling up paper as a part of the writing process during a writing workshop at The Texas Woman’s University Administration Conference Building in Denton, Texas Wednesday, Nov. 13, 2019. Photo by Sarah Pham.