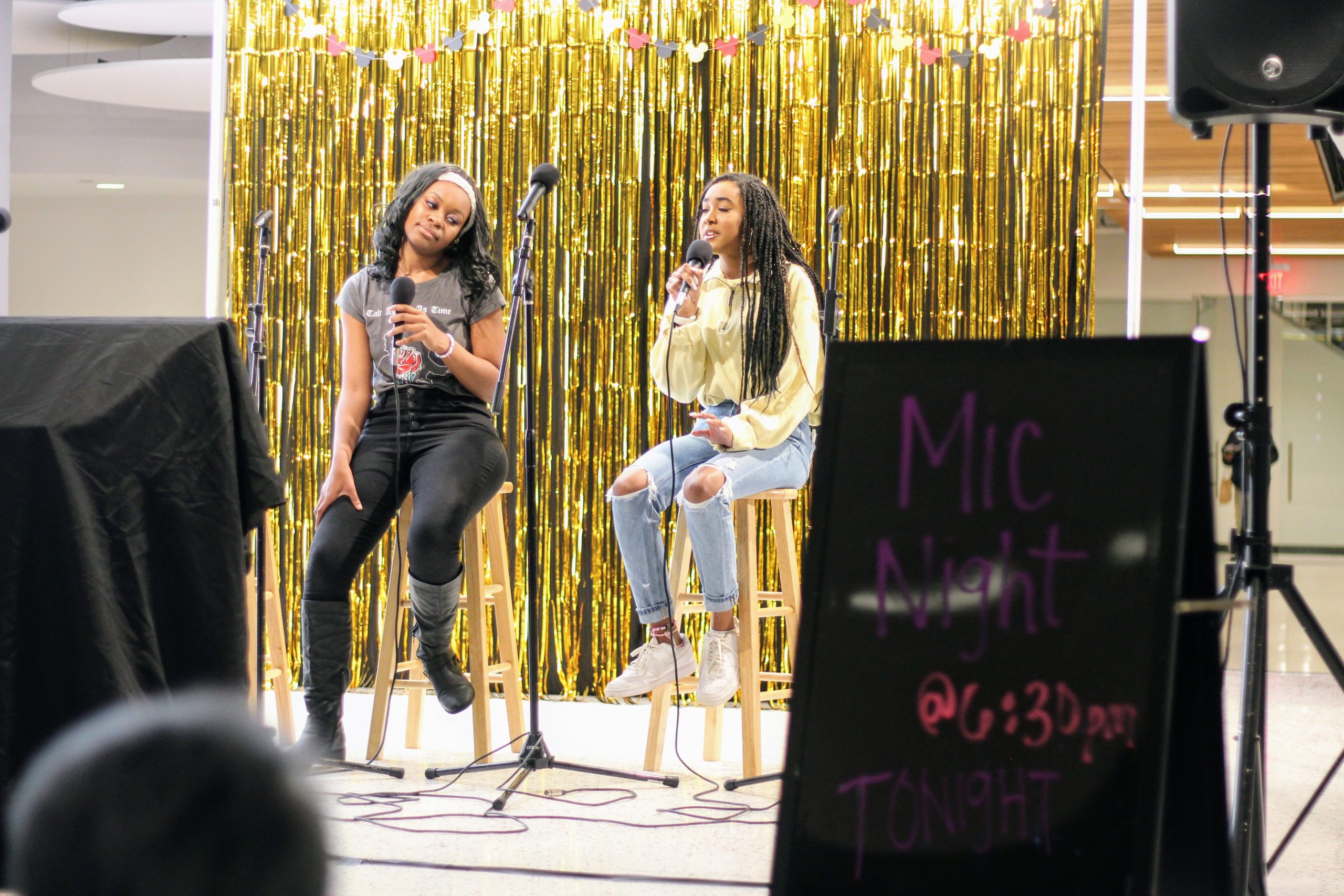 Students come together to share music, poetry at Mic Night

Texas Woman’s University aimed to promote spontaneity and individuality with this semester’s first Mic Night. Held on the first floor of Hubbard Hall Feb. 19, the event served as an open space for both attendees and bystanders to give impromptu karaoke performances.

Guests and students passing by were invited to recite their song of choice either alone or with a group. Many performers took the opportunity to sing throwback songs and Disney musical tunes, creating a nostalgic atmosphere.

Along with musical numbers, guests were also given the opportunity to step onto the platform and share their own personal works of poetry. Event goer and English major Ace Affect recited a personal poem that revealed their own vulnerabilities and inner thought processes. Affect not only presented a piece of spoken word but also stood in front of the crowd multiple times to perform a variety of karaoke songs.

“I just really love open mics,” Affect said. “I went to the one last semester, but I didn’t hear about another one. When I found out about the one this semester, I got excited and came.”

Affect said they thoroughly rehearsed for one of their performances, and completed the others unplanned and improvised.

Attendees were not the only performers of the night, as multiple event organizers and the DJs of the event stood on the platform and joined the night’s activity.

Event organizer and kinesiology major Rita Munene sang multiple times alongside fellow Student Union Crew members. Munene said that she believes there is a significance in an event as welcoming as an open mic.

“I feel like this really brings students together to enjoy, have fun and relax, especially during stressful times,” Munene said. “It also shows that TWU can also have fun.”

Munene admitted to feeling like the campus was “dead” before she got more involved and joined the Student Union Crew. She was happy to be a part of providing such interactive events like Mic Night.

Kinesiology major Heather Bennett, who is also a part of the Student Union Crew, put emphasis on utilizing the student union in ways that promote togetherness and creativity.

“This is an opportunity [for students] to express themselves however they want to, so if that’s through singing, dancing or poetry they can be able to do that unfiltered,” Bennett said.

TWU’s Student Union Crew is currently working towards another Mic Night this semester. Last semester, the Student Union hosted only one Mic Night, but due to its rising success, the crew is aiming for more regular events. The next event is planned for mid-March.