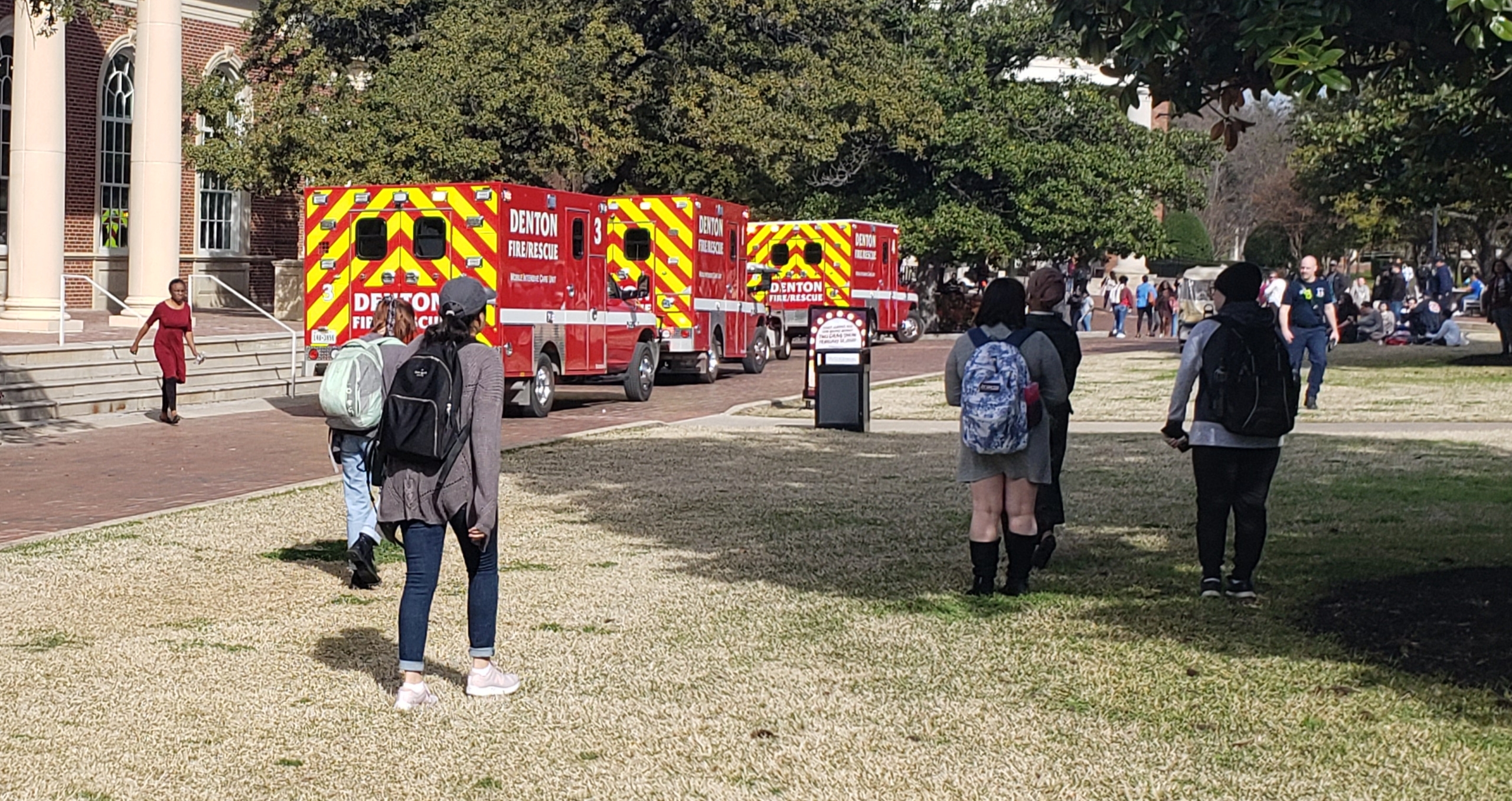 Denton Fire and Rescue evaluated 11 individuals and transported one to a local hospital for observation this morning after they complained of symptoms related to exposure to a weatherproofing chemical at Texas Woman’s University’s Hubbard Hall.

TWU evacuated the Student Union at Hubbard Hall and Redbud Theatre Complex just after 10 a.m. among multiple reports of eye irritation and coughing from people inside the theater, which is on the north side of Hubbard Hall.

Fumes from a weatherproofing solution applied to the outside of Hubbard Hall made their way into an intake valve and seeped into the ventilation system of the Redbud Theatre Complex, TWU assistant vice president of University Communication Matt Flores said.

“Apparently in the process of weatherproofing an area somewhere in the Hubbard Redbud area where the construction’s been taking place, there were reports from multiple individuals that their eyes were becoming irritated and causing them to cough,” Flores said. “Out of an abundance of caution, they let the health authorities know, and Denton Fire and Rescue responded.”

Paramedics evaluated 10 students and one faculty member affected by the fumes in the theater complex. Though Redbud is part of the Hubbard complex, it has a separate ventilation system, meaning fumes did not reach Hubbard, but the university evacuated the building as a precautionary measure.

Theatre senior Walker Delk said he was among those experiencing symptoms.

“I went searching for where the smell was coming from, which probably wasn’t the smartest option,” Delk said. “That’s how we knew – it smelled like acetone. It literally smelled like someone was taking their nail polish off, so I went looking to see if somebody had spilled something because we’re in a theater so stuff like that happens.”

Delk said he was examined by paramedics after being left lightheaded from exposure to the fumes.

Denton Fire and Rescue assessed the safety of both buildings and the university reopened Hubbard Hall at 11 a.m., while Redbud reopened for classes at 1 p.m.

Contractors have about an hour’s worth of weatherproofing left to do at Hubbard Hall, which opened to students this semester and remains partially under construction. The company will work with the university to “determine a time in the future when the building is not in use to complete the work,” Flores said.

Featured image: Students look on as Denton Fire and Rescue responds to reports of eye irritation and coughing from students and faculty at Texas Woman’s University’s Redbud Theatre Complex. Redbud and Hubbard Hall were evacuated after fumes from weatherproofing materials seeped into the ventilation system of Redbud Monday morning.