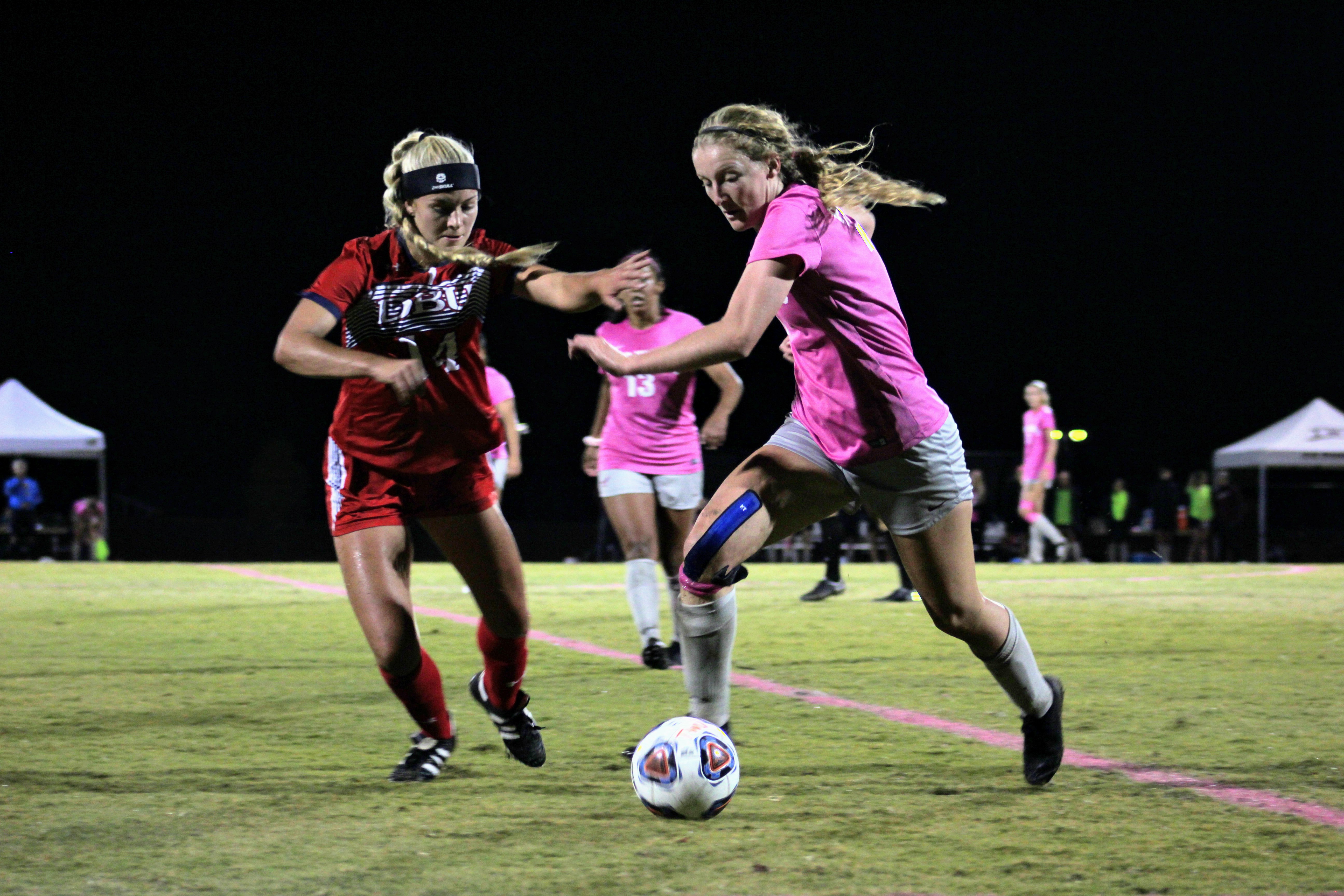 The Texas Woman’s University volleyball and soccer teams both took on their opponents at home this past weekend for the Lone Star Conference.

The volleyball team kicked off the weekend with wins against both Texas A&M International and Texas A&M-Kingsville. Taking down the Dustdevils last Friday night and the Javelinas on Saturday at home, the Pioneers will travel to Lubbock for a three-game weekend starting this Friday at 6 p.m. with a match against Lubbock Christian University.

The Pioneer soccer team, on the other hand, braved a wet home field in their battle against the undefeated Dallas Baptist University Saturday night. Honoring faculty and staff, the Pioneers put up a fight to keep their 6-0-0 record but were shut out by No. 9 in the LSC with a 3-0 win for the Patriots.

Freshman nursing major Addison Mulroney said it was her first time to come watch a TWU soccer game and that she came out to support the Pioneers.

“We’re just here to support the whole soccer team because they always come and support us at our volleyball matches,” Mulroney said.

Janelle Davis, the program director for the kinesiology department, was invited by sophomore soccer player Keely Chapman to be recognized at the faculty/staff night and watch the game. Unlike Mulroney, this was not Davis’ first rodeo. Despite the cold, Davis said the team worked really hard and stepped up their game.

“This is a really good team, and they’re really fun to watch,” Davis said. “They’ve stepped it up tonight – their pace is quicker, and they’re working really hard.”

Freshman forward Jaycee Fuller said that the Pioneers do have that energy, but that they need to continue working on it.

“I think we need to work on the energy a bit more, because we knew that DBU was going to be a, definitely, hard opponent,” Fuller said. “So, we knew that we had to do high-pressing, and I think we need to work more on that, and we all need to be on the same energy level. I feel like most times, when we’re down, the energy’s there – we just need to find a way to capitalize on that and [take] more shots on the goal, definitely.”

The soccer team will take on Angelo State at home tonight at 7 p.m.

Featured Image: Hannah Schneider chases the ball away from the opposing team during a soccer game at The Texas Woman’s University Soccer Field in Denton, Texas on Saturday, Oct. 26, 2019. Photo by Sarah Pham.