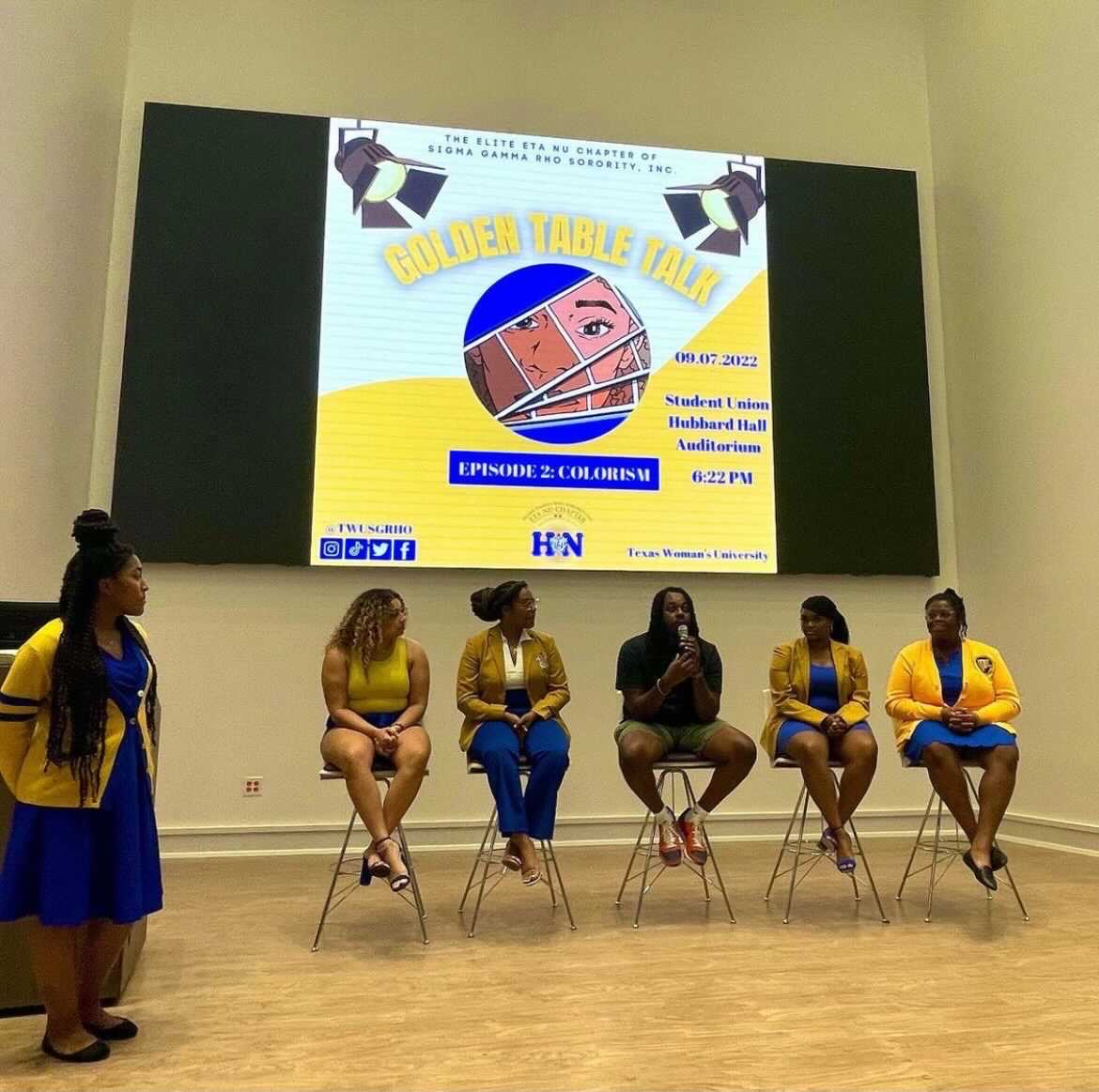 The Sigma Gamma Rho sorority of the Elite Eta Nu Chapter of Texas Woman’s University held a table talk discussion about colorism on September 7, 2022. Students in attendance learned about the definition of colorism and how prevalent the issue surrounding colorism is a problem within the Black community.

Colorism is prejudice or discrimination against individuals with a dark skin tone, typically among people of the same ethnic or racial group.

The issue of colorism is still ongoing today, and many people do not realize how much the idea of colorism plays into diminishing one’s worth based on their skin tone. This diminishing stems from its historical past dating back to slavery.

This tradition follows closely that of the “paper bag test,” in which an individual’s complexion is compared to a brown paper bag. Moreover, if your skin is darker than the said bag you were denied benefits.

Social media plays a huge role in the implementation of colorism while many men and women prefer lighter-skinned counterparts furthering the stereotypes that darker-skinned individuals are undesirable and not worthy of being courted.

These stereotypes have caused harm to darker-skinned individuals and negatively impact their perception of how they view themselves based on their appearance.

Kendell Kelly, a graduate student of Texas Woman’s University School of Psychology and co-facilitator of Tribe, a Black student peer-led support group, was a panel member of the talk and shared his knowledge about the history of colorism and its effect on the Black community.

“I think the conversation on colorism is a great introduction to a lot of things that Black people have perpetuated from what Dr. Joy Degruy calls post-traumatic slave syndrome. It’s a great insight to a lot of definitions that we have within our community based off of intergenerational trauma,” Kelly said.

Colorism, described by Kelly, is a “subtle mostly unconscious thing that needs to be brought to consciousness,” hence its importance within the world and specifically on college campuses. The aforementioned paper bag test was used in the 20th century specifically in private HBCUs like Howard University to assert one’s worth of admission on their skin tone or even hair texture.

The understanding of education and the history of melanated people from various places across the diaspora and across the world is how students can begin to understand and break the stigma of colorism here on campus.

“It’s important to understand our history and understand the falsehoods of Black stereotypes. For example, Black people existed in the Americas before slavery. Cross transatlantic travel was prevalent among Africans and historical evidence shows that they left their mark,” Kelly said.

“Breaking that stigma and educating people about where they are as we talked about on the panel. Realizing the land that you go to school on and the historical context of what has happened in our country gives you more sense of pride, Kelly said.

The conversations surrounding colorism is why the topic needs to be spoken about because it ties to the association of whiteness which stems from the idea of how assimilating in America is to equate yourself with whiteness.

“Comparison is the thief of joy,” Kelly said. “It’s built-in wanting to be associated to whatever is perceived that comes with whiteness and it’s the antithesis of self-love.”

“Attending the table talk about colorism was helpful because it allowed me to see colorism in different forms,” Jackson said. “To be able to hear different perspectives or different people of multiple skin tones in the Black community talk about it was really interesting to hear.”

Jackson as well talked about ways in which students can break the stigma of colorism here on campus.

“Be more supportive of Black people,” Jackson said. “When they look good tell them – Go to Black people’s events. Different things like that will allow us to build community and super helpful in ending the stigma of colorism here because then we’ll know every Black person is supported regardless of where you come from and how light skin or not you are.”

Brielle Gines can be reached via email at bgines@twu.edu.