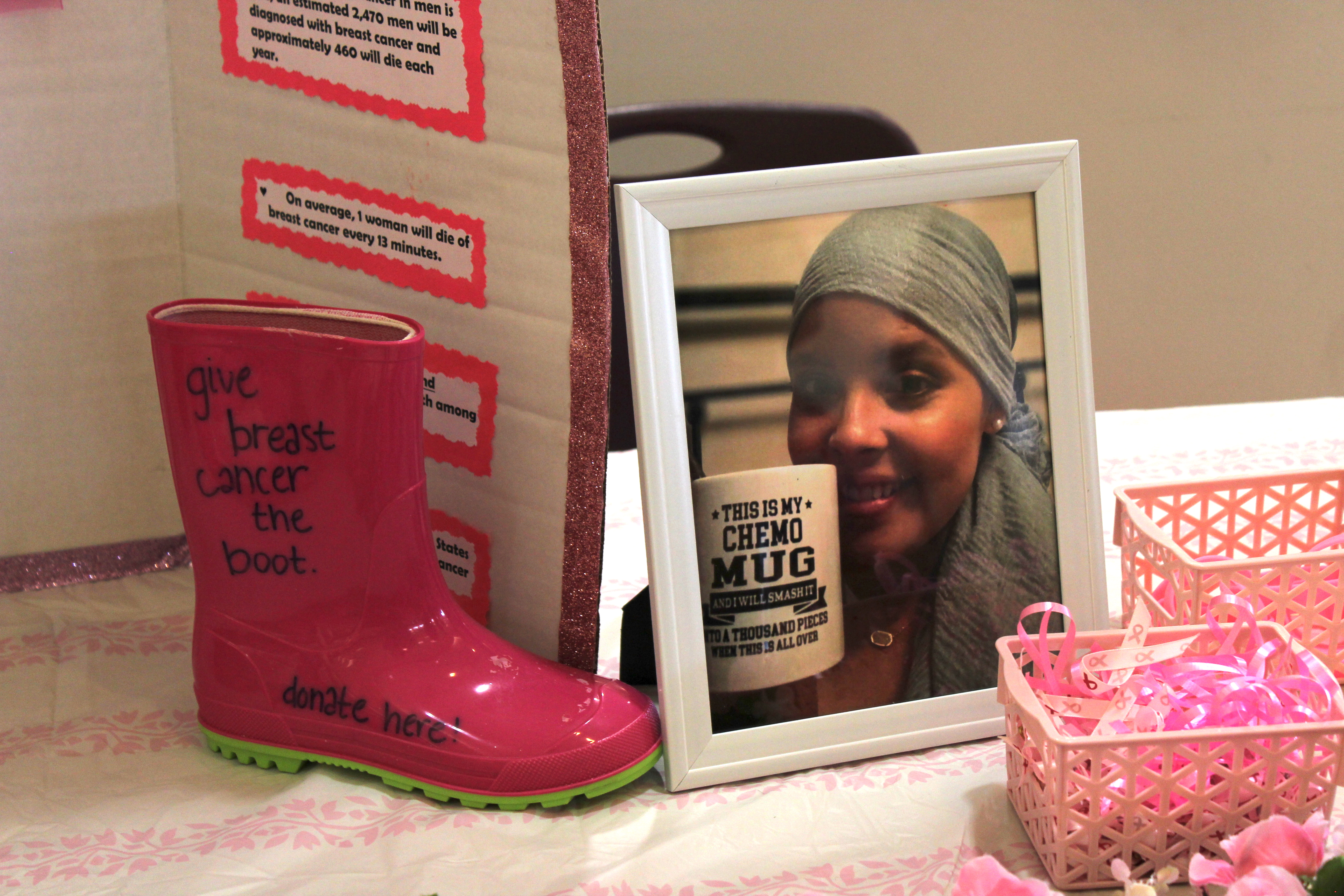 To the sounds of students laughing, chicken grilling and cashiers wishing customers a good day, a white table decorated with pink ribbons and pink flowers invites students in. Seated on top of the table is a pink donation boot with the words “Give Cancer the Boot” written on it, a trifold titled “Breast Cancer” offering information about breast cancer and a framed photograph of a young woman smiling at the camera.

Behind the table is a banner with names written in purple, pink, green and blue. Each of these colorful names represents someone going through breast cancer or a supporter.

The Breast Cancer Awareness Banner was the kickoff event for the Sigma Lamda Gamma Delta Delta chapter’s Pink Month. The event was held Oct. 3 at the Maroon Lobby. Students were invited to write down the names of someone they know who has breast cancer or their own name in support.

Through the month of October, Sigma Lamda Gamma will host a series of events to help spread awareness of breast cancer as well as raise money for their delegate, TWU graduate student Hanna Stetler.

“The reason why we do this is because breast cancer awareness is our philanthropy,” Ximena Villegas, senior communication sciences and disorders major and vice president of Program Development, said.

In the past, Texas Woman’s University’s Delta Delta chapter has held Pink Week where they organized a week-long list of events to increase awareness of breast cancer. This year, to alleviate the stress of planning a week of events, the sorority decided to stagger the events throughout the month of October.  This way it would be easier for members to participate and still help bring more attention to breast cancer.

“In our house in the showers, we have tiny pamphlets, and it is like a little monthly checkup [informational],” Aime Limones, president of the Delta Delta chapter and senior chemistry major, said. “We are constantly learning, and we hope to expand what we know to other people.”

Last year, one of the sorority’s sisters informed the chapter about Stetler, a graduate student enrolled in TWU’s occupational therapy program. She is married and has a daughter named Sawyer.  Several months ago, Stetler felt a lump in her left breast.

Stetler has no family history of breast cancer, so she believed the lump to be a cyst. But after months of pain, she finally went to her OG/GYN and found out she had a malignant tumor. Stetler was diagnosed with invasive ductal carcinoma and is currently going through chemotherapy.

Some of the events planned for Pink Month are programs the Delta Delta chapter has done in past such as the Pink Promises Walk, their Breast Cancer Awareness Informational and their Survivor Panel. They have also added new events like their kickoff Breast Cancer Awareness Banner event and Zumba for a Cure, which will be held later in the month. In addition to all of the events, the Sigma Lamda Gamma Delta Delta chapter is also selling various items such as bracelets and baked goods at sporting events.

The philanthropy chair and senior psychology major Iriana Gonzalez is in charge of the fundraising and is in direct contact with the delegate.

“Usually, I’ve taken ideas from previous philanthropy chairs, and I try to stay away from things that haven’t done too well,” Gonzalez said. “I try to come up with ideas and ask the chapter as well.”

Although Gonzalez has not had breast cancer, she can relate to Stetler’s struggle with cancer. Gonzalez was diagnosed with papillary carcinoma in August 2016, two weeks before move-in day at TWU.

During her senior year of high school, she got a cold and lost her voice. Her mom took her to a night clinic where she was told that the right side of her thyroid was swollen. Like Stetler, Gonzalez and her parents didn’t think it was cancer. They assumed it was hyperthyroidism, which runs in the family.

Her biopsy came back negative, and her doctor told her it is nothing to worry about but to come back if it continued to bother her. Around three months later, she could feel something in her throat when she swallowed, so she went back to the doctor and had half of her thyroid removed.

The doctors tested her again and found out the tumor was malignant. A week later, Gonazalez had to come back and get the rest of her thyroid removed and cancel her enrollment at TWU.

“I never cried when I was diagnosed, but I cried because I couldn’t come to TWU,” Gonzalez said. “I knew if I didn’t go to college the first year, I would get behind, so I took nine credit hours [at a community college] and three hours at TWU. My goal was to eventually come here.”

Doctors thought she was fine after the second surgery, but her parents had a bad feeling about it. They took her to MD Anderson and were told that cancer spread to her lymph nodes. Gonzalez had to get 26 of her lymph nodes removed.

Thyroid cancer is a slow-growing cancer, so Gonzalez will not be in remission until doctors can’t find signs of cancer for five years. To remind her she has support, Gonzalez and her family wear a pink, purple and teal bracelet — the colors of thyroid cancer — with the words “No one fights alone” written on it.

“Every person’s story is completely different, and everyone goes through different struggles,” Gonzalez said. “But no cancer is less than the other.“

The next Pink Month event, the Pink Promises walk, is tomorrow starting at the Fit and Rec gardens. For a list of other events, participants are encouraged to follow the Delta Delta Instagram for the complete list and instructions on how to donate.

Note: Plamedie Ifasso is a personal friend of Iriana Gonzalez

Featured Image: A photo of Hannah Stetler, an occupational therapy graduate student, sits on display during Pink Month at The Brackenridge Student Union in Denton, Texas on Thursday, Oct. 3, 2019. Photo by Sarah Pham.

Published in Community and Features