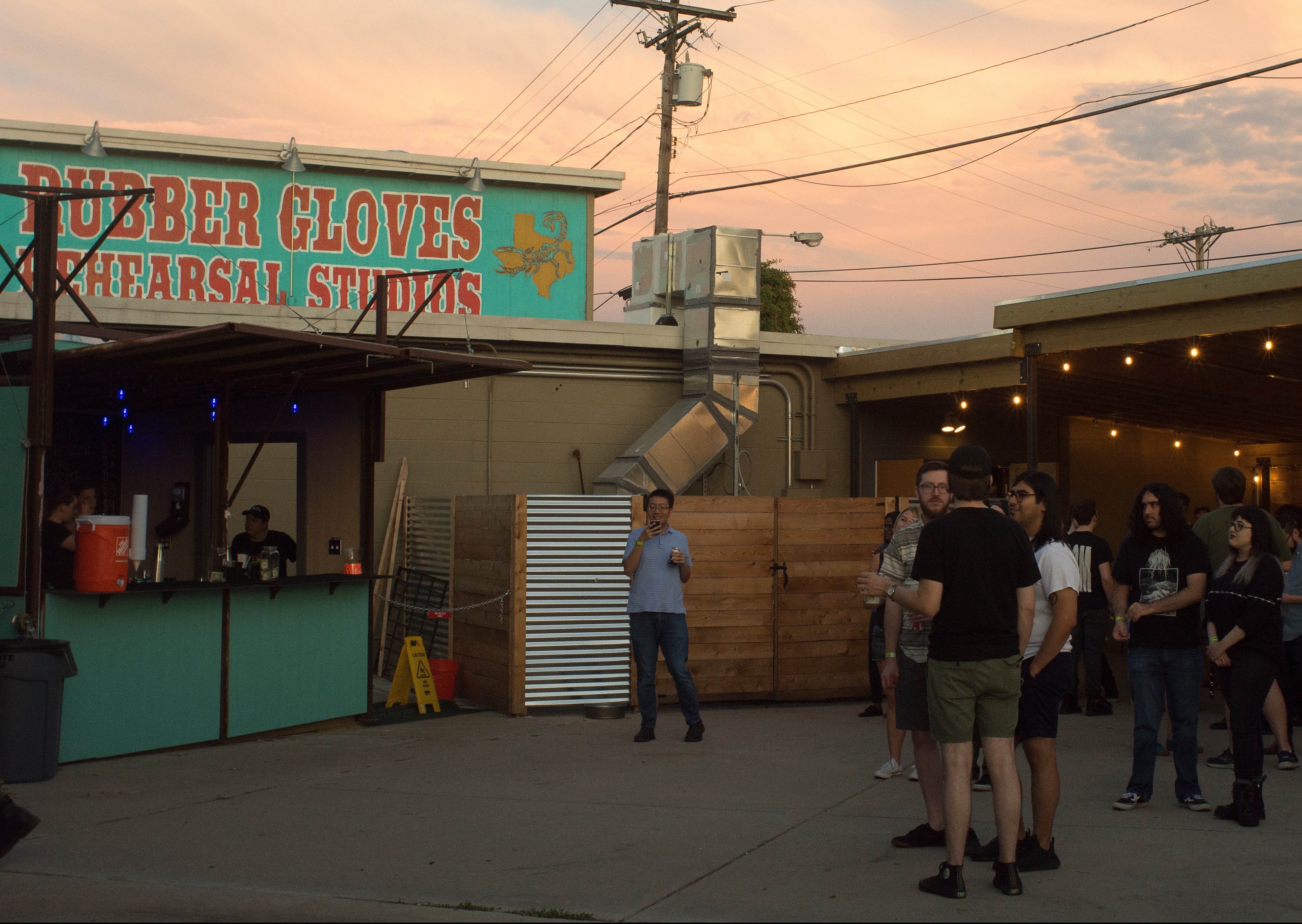 Rubber Gloves Recording Studio was originally a cement factory and was then turned into a live music venue, having officially opened its doors in April of 1997. The studio is most notorious among North Texas for housing rock and alternative bands such as Modest Mouse, Melt Banana and Daniel Johnston, just to name a few. The venue has played a big role in the local music scene for taking the place of the former concert hall, The Argo, after closing in the early ‘90’s.

However, the studio’s lifespan was cut short after a sudden shut down nearly three years back.

Between shutting down back in 2016, being put up for sale in 2017 and the circulation of only distant rumors of the studio’s comeback, the Rubber Gloves Recording Studio has since become nothing but a memory to its once-avid event-goers. However, it quickly spread throughout the city when it was revealed that Rubber Gloves would be having a two-night reopening celebration, Aug. 23-24. The event hosted bands of genres such as rock, alternative and indie, inviting Riverboat Gamblers, Mind Spiders, Horries, Eat Avery’s Bones, ABBV, Borris and Uniform to perform.

Rubber Gloves Rehearsal Studio originally opened in April of 1997 and remained a local hot spot for urban/indie, alternative and rock music admirers until it shut down about three years ago.

Plans for a Rubber Gloves comeback became drawn out through various updates, never leading to its grand reveal. The reopening was most notably held back by the recent termination of the venue’s former long-time owner, Josh Baish. Baish was let go from the RGRS ownership mid-July of this year, however, leaving the building’s fate up in the air.

Not long after Baish was fired, retired optometrist Rob Houdek bought the studio, taking over Baish’s position. Houdek then quickly began working on opening up the building’s doors once again for Dentonites to attend.

Fortunately, the sudden change in management did not delay plans of a revival.

“We have been closed for about three years, and we’re opening back up to welcome everybody from our ‘old crowd,’” venue worker Priyanka Thakker said. “We had a lot of regulars and a lot of bands come in that have made it big through us, and so we’re really trying to bring that back.”

General manager Chad Withers, remained stationed at the entrance of the building and welcomed all guests, old and new. According to Withers, the studio holds immense sentimentality and history that he wanted to be known as attendees enjoyed the event.

“This reopening means that we have this great venue in Denton that is able to feed the desire to see a wide variety of music performers every single night as well as bring in different cultures and communities all here,” Withers said.

Despite being out of business for the past few years, the Rubber Gloves Rehearsal Studio still held its loyal fanbase and also caught the attention of some fresh faces.

“This is our first time here at Rubber Gloves, and so far, so good,” event goer Serena Singh said.

The event showcased a wide variety of underground music, capturing the likes of those in the audience.

“The talent here is really great, and it’s been a great night,” another attendee Armang Singh said.

Performing a setlist of original songs that night was alternative band and New York natives, Uniform, made up of good friends, guitarist Ben Greenberg and vocalist Michael Berdan.

Uniform is currently on tour and had been performing in Texas for the past couple of days. However, with the news of the Rubber Gloves grand reopening, they were able to set aside just enough time in their schedule to make an appearance here in Denton.

Their group started the tour in San Diego and have since traveled to Phoenix and San Antonio, while taking a day off in-between in Van Horn, Texas to rest. They had been set out to leave the next day for Houston.

“I would love to come back,” Greenberg said. “It was so great and the crowd was awesome.”

The revival of the Rubber Gloves Recording Studio has brought back its usual busy schedules, hosting a variety of artists on their outdoor stage nearly every day each week, picking up the venue’s occupancy right where it had been left off.