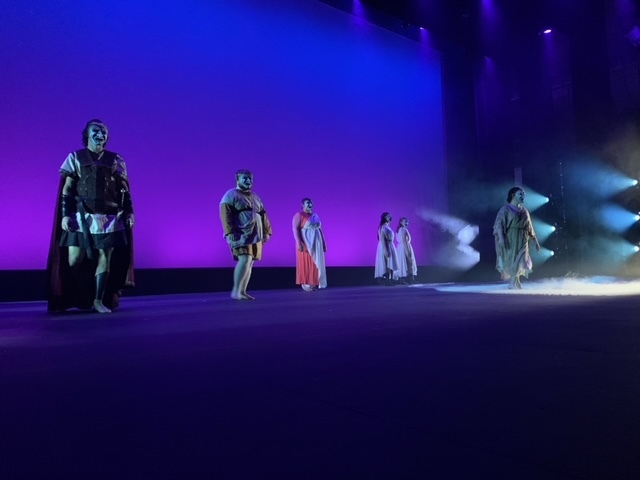 “Electra”, directed by Ariana Cook, is a dramatic Greek play that tells the tale of a daughter wanting to avenge her father’s death.

The show took place on Feb. 11 through Feb. 12 in Margo Jones Performance Hall. Opening night was originally scheduled for Feb. 10 but was cancelled due to weather.

Savannah Valdez did a phenomenal job at playing the main character Electra. She really gave it her all and poured her heart and soul into the lines to really bring intense emotions of grief, anger and rage as she prayed to the Greek gods. She brought so much passion to the stage and was able to portray the heated emotions of Electra extremely well. It was very clear what the character’s motives and feelings were through Valdez’s talent and great acting.

The music for the show was eerie and mysterious and did a great job of setting the mood and the tone of the performance. It emphasized the negative emotions and overall plot of the play and helped portray the wickedness of the story. The music could have been used to stress some of the moments of only dialogue throughout the performance. Overall, the music helped highlight the suspenseful theme of the play.

The costume crew, including Haleigh Beck, Dharma Saiz, Megan Ditto and Alisha Hannah, created costumes that brought out the characteristics of each character, and gave them all a haunting and creepy full-face mask that was worn when they had no dialogue. The masks brought it all together, making each character look dead and eerie when they were worn.

Although there was no set on stage, the dramatic acting along with the lights, costumes and fog machines made up for it. The stage was filled with fog to help provide some substance to the area to bring it to life a little bit. The lighting helped highlight the scenes, changing from red to blue to purple with green spotlights on characters during their monologues to emphasize distress and anger. When some of the actors were idle, they would stay on stage with their masks and create a scene with their bodies, including walkways for the actors that were currently speaking. All of these elements helped bring structure to the stage and made up for the lack of a physical set.

Throughout the performance, it was very clear and easy to understand what the actors were saying. There were no muffling or slurred words, and the actors’ articulation was precise. The microphones helped amplify the dialogue, and there was no question about what was being said on stage. The sound crew, Lauren Schlossberg and Grant Tidwell, did a great job at making sure that the actors were heard clearly and could be heard across the whole theatre.

Overall, this performance was filled with talent from the actors to the backstage crew. The dramatism in this show was brought to a whole new level, and the story was portrayed in a new and unique way. “Electra” was a fantastic show that brought this old tale to life.

Laura Pearson can be reached via email at lpearson6@twu.edu