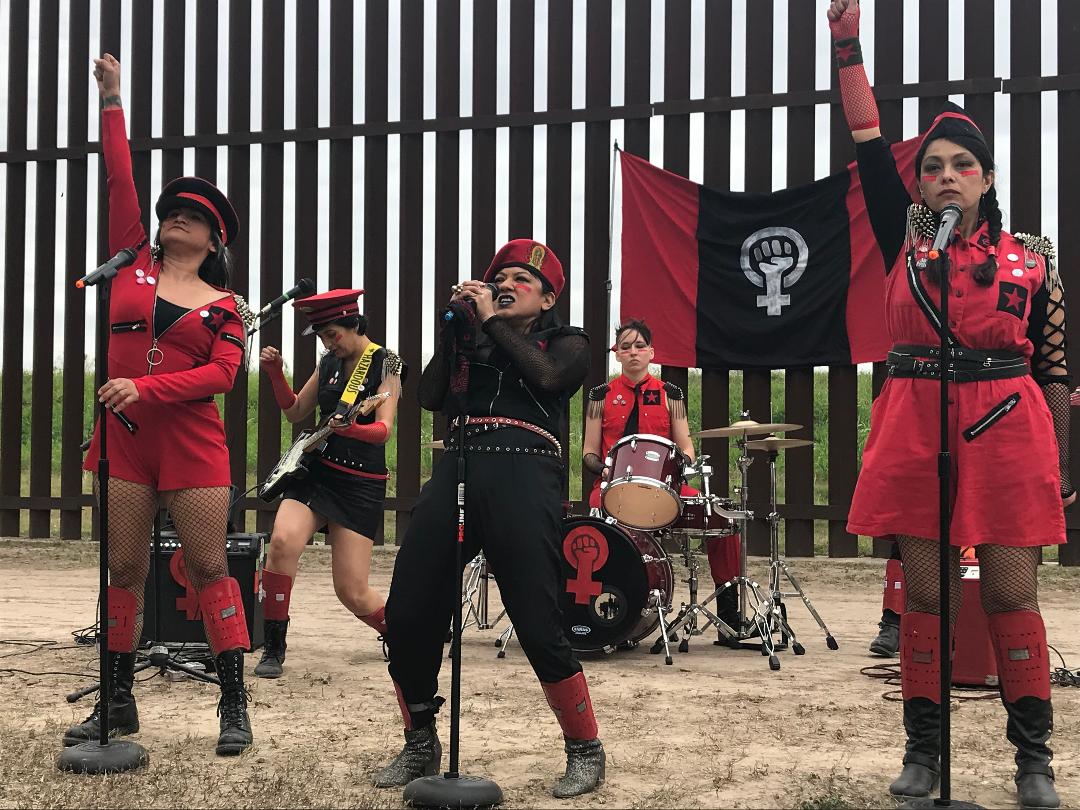 As social and political tensions an all-time high in a not-so-distant dystopian future, a young Hispanic refugee by the name of La Madre Valiente sets her sights on becoming the people’s guide to a feminist and egalitarian revolution—but she’s not alone. Along with her disciples, Las Hijas de La Madre, they fight to re-establish and solidify the value of civil rights.

The electric and ambitious musical is a part concept album, part live theatre that serves as a commentary on several social and socioeconomic matters including sexual liberation, gender equality, women empowerment, self-defense, underpaid labor, the Mexico-United States barrier, racism and colorism. The musical is in direct correlation with her second book “The Canción Cannibal Cabaret & Other Songs,” which focuses on the “cannibalizing knowledges of society from before the fall of a civilization.” Ortiz said that she used punk rock as an outlet to express how timely and urgent each issue is to the betterment of the country’s policies on human rights.

“We are living in, like, apocalyptic times,” Ortiz said. “At the time I wrote this, everyone was saying that my style is so 1960s Chicana nationalist, which was before Trump’s presidency when that sort of political poetry wasn’t very involved in and people would tell me, ‘You’re so blatant and angry,’ and I was like, ‘Well, why aren’t you angry?’”

In 2016, as a Master of Fine Arts in creative writing student at the University of Texas at Rio Grande Valley, Ortiz decided that she wanted to present a passionate performative piece as her thesis. Ortiz recalled having to quarrel with her department for a sufficient space to showcase her project.

“I was in graduate school when I started writing this, and it became my master’s thesis,” Ortiz said. “But it wasn’t until I presented my first work-in-progress performance that even the chair of my thesis understood that it’s meant to be this futuristic propaganda campaign after a global-collapse apocalypse.”

Packed with witticism, the musical uses the melodies of existing rock songs as foundations for reinterpretation and remix, as well as original numbers to narrate the journeys of La Madre Valiente. Song “La Frontera Te Llama” is set to the tune of The Clash’s “London Calling” and expresses feelings of cultural and environmental belonging.

Another song, “Black Men” is a repurposed version of Jim Carroll’s poem “People Who Have Died,” in which Ortiz fiercely shouts the names of American Black men who have been killed by police. She gives tribute to well-known cases like Eric Garner, Oscar Grant and Trayvon Martin, as well as those whose deaths have gone largely uncovered like Dante Parker, Kimani Gray and Kendrec McDade.

Ortiz said that her musical is her way of bringing awareness to social injustices that have affected her and those around her. She also hopes her work encourages others that they are capable of making a change for political matters they advocate for.

“When you see something that you feel powerless to change, one person might not be able to change it,” Ortiz said. “So, you have to really voice your fears and your angers, find people who share the same passions, and then build a movement. That’s the only way that anything changes—you get more and more people on board.”

“The Canción Cannibal Cabaret & Other Songs” was the winner of the 2020 American Book Award for Oral Literature and has been performed in multiple Texas cities including San Antonio, San Marcos, Dallas, Houston, Austin, McAllen, Harlingen, Edinburg and Victoria. For more information on upcoming performances and additional projects by Ortiz, visit amaliaortiz.net.