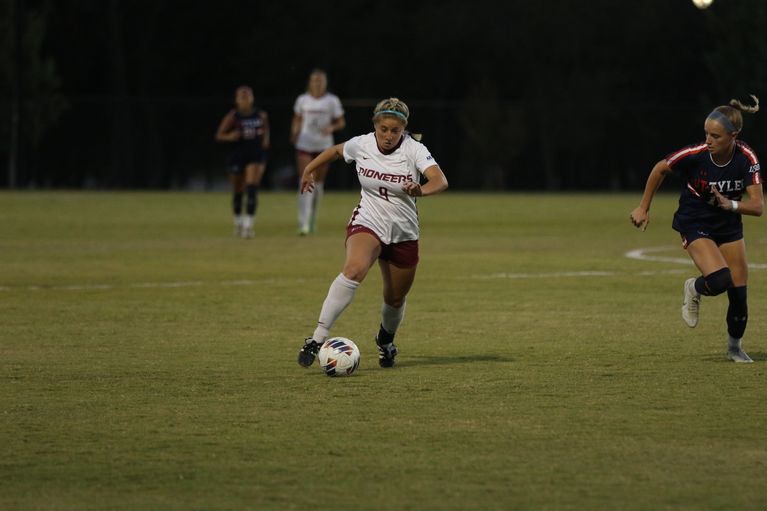 The Pioneers swept Cameron University on Oct. 7 in the Kitty Magee Arena while raising awareness for breast cancer in their annual Dig Pink match.

The Pioneers fought back after a five-point stretch, taking the set in a ten-point scoring run. Trixie Oche led the match with ten kills, with Tori Woods following with seven and Monica Wood with five kills. The Pioneers also secured season-high blocks, four aces and 20 assists.

Oche once again led the Pioneers in kills, and both Erin Jones and Kiana Reed registered seven assists.

The Pioneers were swept by UT Tyler on Oct. 14 after starting off strong. Oche led with excellent performance, often providing momentum-changing kills and a .667 hitting percentage.

Following the loss against UT Tyler, the Pioneers faced off against Dallas Baptist University where the Texas Woman’s volleyball team fell in three sets. Tori Woods led the match with 23 attacks and seven kills.

TWU recorded a stalemate in their match against West Texas A&M on Oct. 8 with both teams scoring no goals.

The Pioneers recorded eight saves throughout the match. The West Texas Lady Buffs sent off several shots in the first half of the match, but goalkeeper Morgan Sherman ended the match untouched. Sherman has recorded 59 saves for the Pioneers this season.

In the Oct. 12 match against UT Tyler, the Pioneers ended their scoring drought but tied once again at 1-1.

The Patriots took an early 1-0 lead due to a penalty kick made at the 15-minute mark. TWU continued their excellent defense this season with Sherman recording three saves. Bri Luna scored the second goal of her career.

“I am proud of how our team battled back after giving up an early goal tonight,” TWU Head Soccer Coach Babak Abouzar said in a press release. “The first half was not one of our best, but we regrouped in the second half.”

TWU earned their sixth draw against Lubbock Christian University on Oct. 15. The Pioneers took an early lead 1-0 when the Pioneers scored in the ninth minute. LCU equalized the score in the 39th minute and neither team succeeded in scoring for the rest of the matchup.