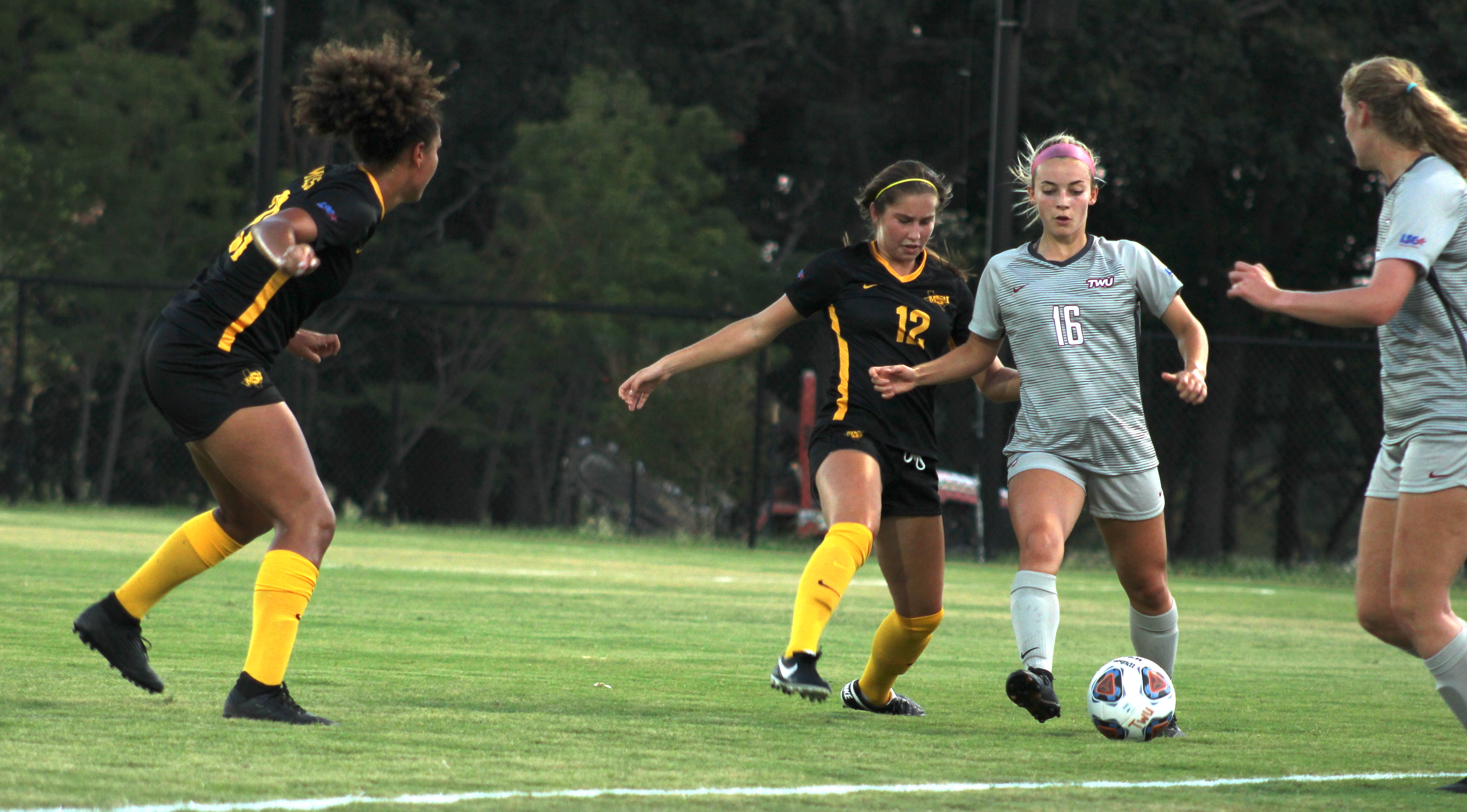 Soccer scores another win at Thursday’s Pack the House

Texas Woman’s University invited students to Pack the House at Thursday night’s soccer game, raffling away a $500 housing scholarship to a residential student.

The game started at 7 p.m. at TWU’s Pioneer Soccer Park and lasted until 9 p.m. Pioneers faced off against Midwestern State University’s Mustangs, winning the game in the last ten minutes with a goal bringing the score to 1-0.  Attending students entered the raffle as they came in, and the result was announced at the conclusion of the game — the winner of the scholarship was Abigail Imarhiagbe, from Stark Hall.

“We do this every year,” Katelyn Rood, resident assistant for Stark Hall and sophomore child development major, said. “I know I went to the one last year, and it was at the same soccer game — it’s usually a soccer game, because that’s the sport that’s going on right now that’s big.”

The game was tied at 0-0 through the first half and most of the second half, until a goal scored by Abigail Martinez secured the Pioneers the win.

The soccer game was also a Campus Challenge event. Campus challenges are events being held on campus as part of the national AORE Campus Challenge competition. The housing scholarship offered an incentive for students to get outside and participate in the event and get involved with student athletics.

“We try to just get people outside,” Rood said. “It gets people outside, gets them points for the Campus Challenge event and just gets our students involved with athletics on campus.”

Admission to the event was free for all TWU students. To enter the raffle for the scholarship, students went to the table set up by Housing & Dining and highlighted their name off the list of students living on campus. Their names were written on tickets, which were then drawn to determine the winner of the scholarship.

The only requirements to be considered for the scholarship were to attend the game and be a student living on campus, as the scholarship will go toward housing expenses. Results of the raffle were announced on the field a few minutes after the end of the game.

Concessions were sold at the event, including pizza as part of a fundraiser for the Make-A-Wish Foundation.

Following this game the Pioneers have a 5-1 win-loss record.

The next away game will take place Oct. 3 against Lubbock Christian University. The Pioneers will face them at the LCU Soccer Field.

Featured Image: Ava Schulte keeps the ball away from the opposing team during Pack the House at The Texas Woman’s University soccer field in Denton, Texas on Thursday, 26 Sept., 2019. Photo by Sarah Pham.