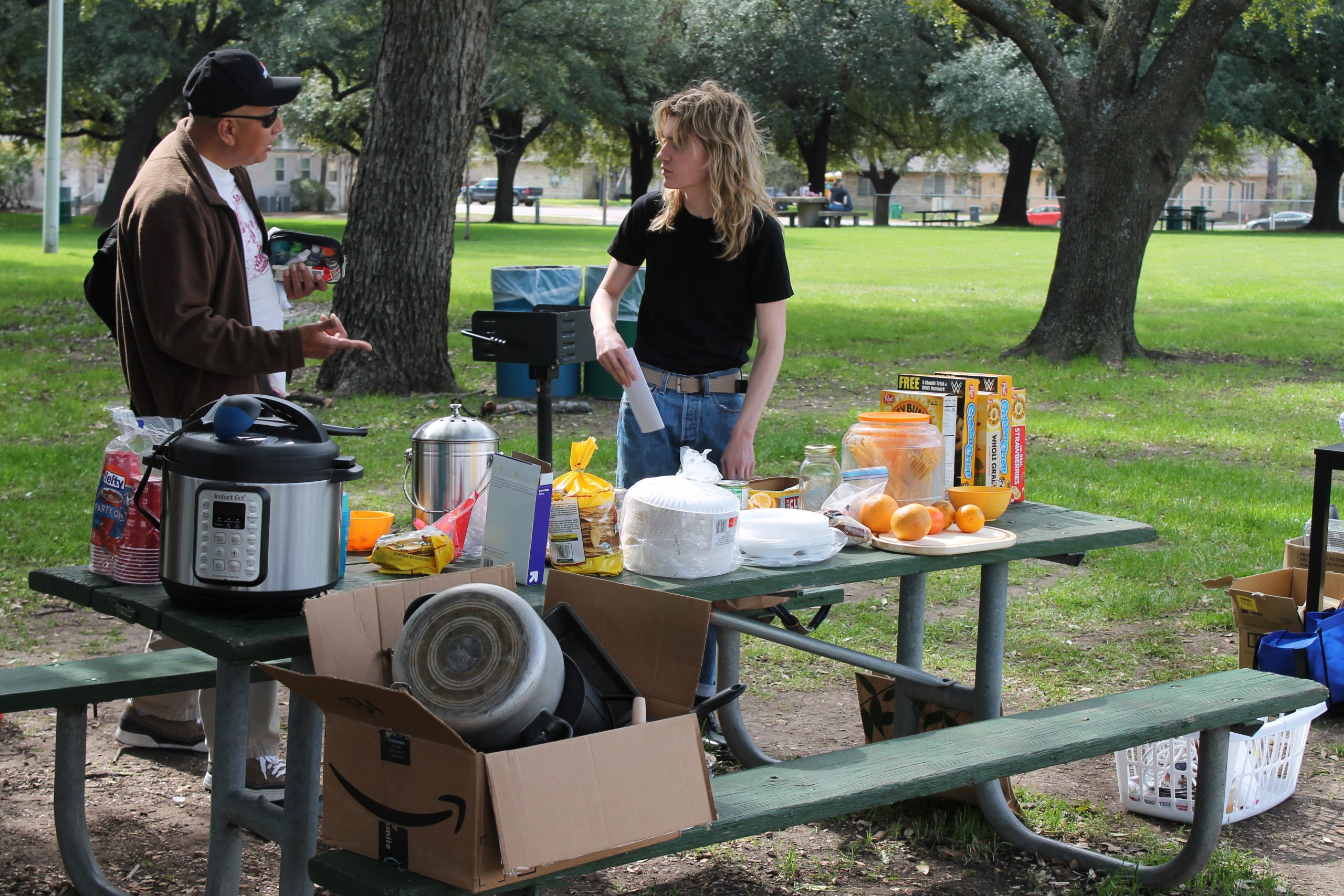 Pacifist collective Food Not Bombs reallocates food for those in need

The United States is the world’s leading country in food waste. Nearly 50 percent of all produce in the country goes to waste, adding up to $160 million worth of produce annually.

In recent years, the massive amounts of wasted food have become the biggest occupant in a majority of the country’s landfills. The food waste epidemic continues to grow each year, but Denton’s Food Not Bombs organization has its sights set on changing that.

Food Not Bombs is a global organization of independent collectives that work towards reallocating food that gets thrown away but is still edible. Volunteer Aran Leh said that 50 percent of the city’s landfills are wasted food and organic material, an aspect that the Denton FNB community keeps in mind day-to-day when distributing food that would otherwise go to waste.

The name “Food Not Bombs” comes from the movement’s efforts in advocating for passivism, non-violence and taking direct action. It puts emphasis on the amount of money the country spends on wars and foreign affairs, and the lack of thought put into spending money on those who may be starving or may not have enough food to feed their families.

As an independent collective, the organization is entirely run by its volunteers, having no authoritative group or headquarters overseeing the operation. The regional groups associated with FNB are communities that have all individually come to a consensus to join the efforts in resolving food waste. The volunteers vote on every action put into place, and everyone within the groups are known as equals and fellow collaborators, FNB volunteer Zak Cannon said.

“It’s sort of an anarchist organization in the sense that there’s no bureaucracy and no chain of command,” Cannon said. “Nobody’s really in charge.”

There is also no set strategy put in place for the movement as it operates freely and concisely, the volunteers planning its schedules week to week.

Despite starting out a little over a month ago, FNB does not hold back when it comes to setting goals and benchmarks for their Denton branch as they aim to not only attract local Dentonites, but also local businesses and restaurants to help donate unused food. However, for Cannon, local attraction is not the only attention the organization aims on gaining.

“I would like to see interactions with the local government,” Cannon said. “Also, to be able to push local governments to provide more for people in the area who need food.”

When it comes to staying financially afloat, Denton’s FNB carries itself as a self-funding organization whose volunteers often come together to contribute their own resources and money. Along with this, donations from the local community are also accepted through a PayPal portal. Financial constraints do not normally cause any negative effects, as it is a low maintenance operation, Leh said.

“It’s a low-cost organization because we’re taking food that would be thrown away, and just cooking and reshipping it,” Leh said.

FNB does not only focus on food waste consciousness, but also provides the community with haircuts, hygiene products, clothes, literature, art and education.

Within the four weeks that Denton FNB has been running, over 100 people have interacted with the organization and joined in their efforts to prevent food waste. They have also received support through a “considerable amount” of donations of books and clothes from the community.

The Denton branch of Food Not Bombs currently holds weekly gatherings in Denton’s Quakertown Park on Saturdays, where they both give and accept donations from those who stop by. The branch is always seeking help and openly invites volunteers to join their efforts into stopping world hunger.