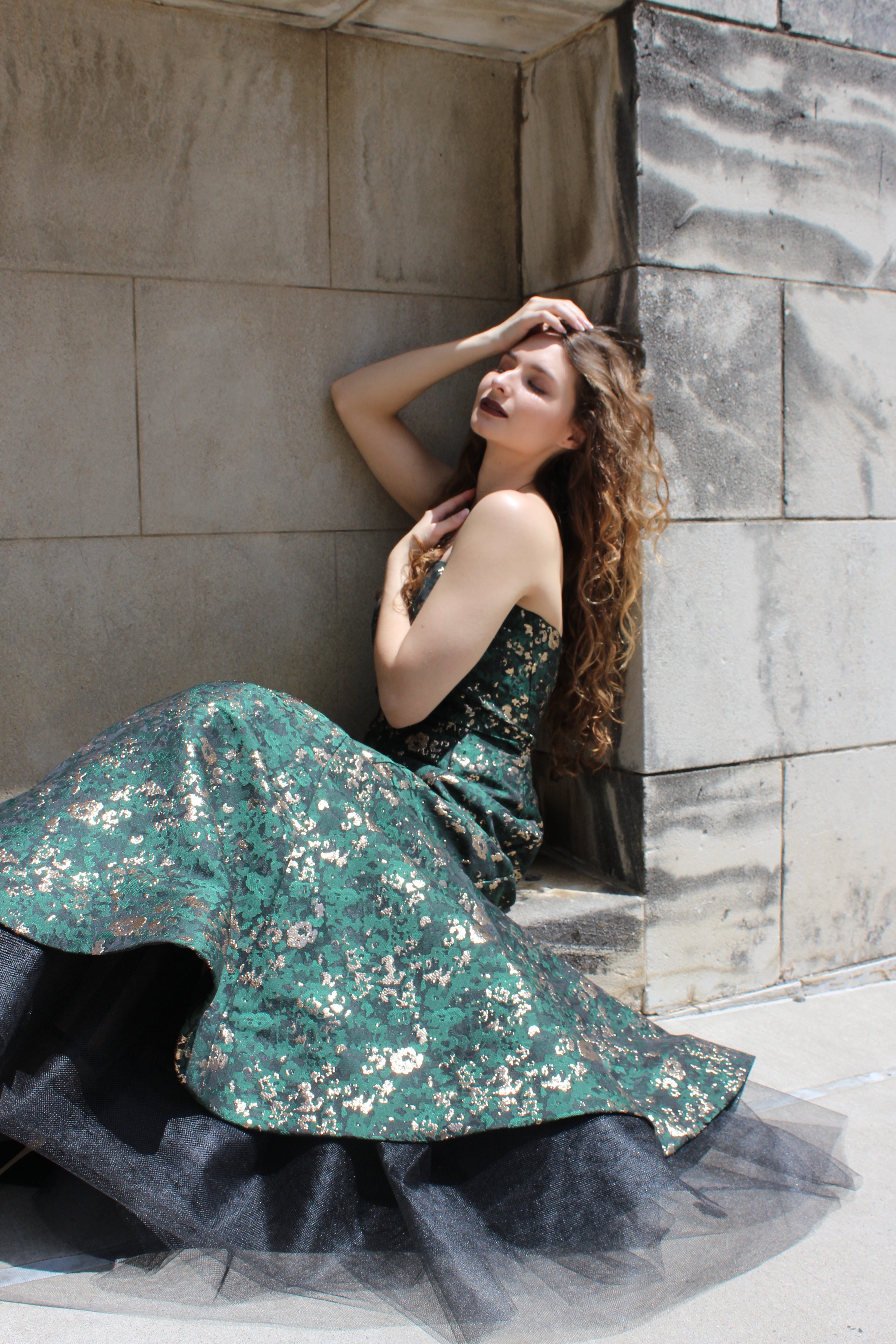 Out of the dark and into the light: A domestic violence survivor’s journey to the Celebrate Texas Runway

What started as a gown for an advanced patternmaking project last semester has now become a platform for a fashion design student to share her inspiring story and empower women along the way.

In less than a month, domestic violence and sexual assault survivor turned fashion design major at Texas Woman’s University Jennifer Stanley will have her three-piece collection, “Rise of Venus,” walk the runway in Houston. Her collection was chosen by Fashion for Good to be a part of their Celebrate Texas Runway, which supports Texas fashion designers and is known for putting its proceeds towards different social issues.

Like Fashion for Good, Stanley aims to use her fashion career to raise awareness about different issues and social justice movements, somehow managing to do so while balancing her roles as a student, mother and friend.

“She’s extremely dedicated to her work, and I do not know how that girl does it because she’s a single mom, also, so that is just crazy,” Stanley’s classmate and friend Katie Edwards said. “The amount of things you have to do to be a design major – and then she’s got a kid, also. How she juggles everything is just insane.”

Just a few years ago, however, Stanley was not in school at all. She had withdrawn from school when she was pregnant with her son and was a stay-at-home mom when he was born. She was also married, but she said it took getting out of her marriage for her to find herself again.

“Whenever I left that situation [marriage], I was just trying to figure out what to do, and I realized I’d really lost myself,” Stanley said. “I realized my only option for the future that I wanted was to come back to school. I was really scared, and I didn’t think I could do it, but I think I really found myself – I found my purpose.”

When she came back to school, Stanley added a minor in multicultural women’s and gender studies. Her motivations inspired by her classes and her 2-year-old son Zeke have become pivotal in her journey as a domestic violence survivor and woman in pursuit of a career in fashion.

“I feel like we all go through that journey as a woman – celebrating that beauty that we all have,” Stanley said. “I feel like I’m more motivated now that I’m a mom. I feel like everything I’ve been through with him [Zeke] has helped me reach a greater understanding of what I want to do, but yes, it definitely makes things more difficult.”

The clarity of direction that Stanley sees in her work was all inspired by her first gown made last semester. Now, she said she is using this collection to empower the women who wear it.

“My inspiration, basically, is the inner goddess that’s inside every woman, and for me personally – and what I’ve come to realize from others’ experiences around me – is that you realize your true inner beauty once you go through a dark moment in your life,” Stanley said. “For me as a designer, whenever a woman puts on my gowns, I want her to wear the gown – I don’t want the gown to wear her. I want her to put it on and instantly light up and feel like that true inner goddess she is, so that’s why I named it ‘Rise of Venus: Discovering the inner goddess inside all of us.’”

Much of Stanley’s current work is focused on domestic violence and sexual assault awareness as well as women’s rights, she said, but that is not her only focus. Dr. Anna Magie, associate professor of fashion merchandising, said Stanley is highly motivated and always working on a project to help the community.

“I would say she’s very concerned about local issues, and she’s certainly expressed an interest in environmentalism and things like that,” Magie said. “She’s very willing to give back and, like I said, help with the community.”

Stanley’s concerns for her community do not stem from a life without adversity. Having dealt with many issues like her and her son’s allergies, being a single mom, issues with her apartment, and time management, Edwards said that none of that ever stops her.

“There’s just lots of things going on in her life that really could inhibit her from trying to achieve what she wants to achieve, but she doesn’t allow it to,” Edwards said. “I just think that’s so inspiring. She doesn’t allow anything to stand in her way.”To keep up with her story and see more of her work, view Stanley’s portfolio and follow her on Instagram.

Katelyn Garst can be reached via email at rgarst@twu.edu