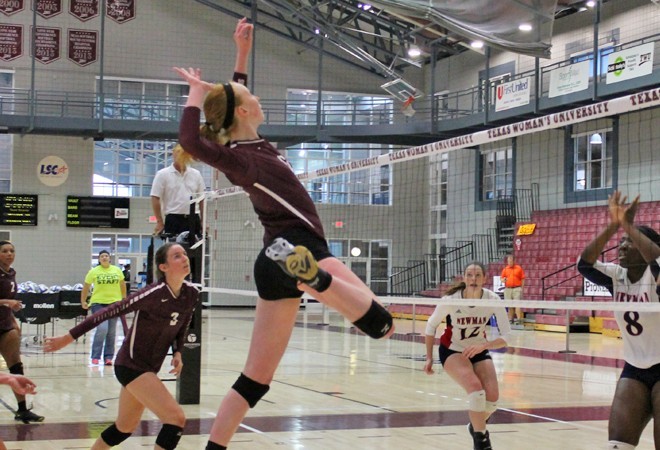 Twins, Courtney and Caroline Noel have been playing volleyball together since middle school, now as first-years at TWU, their adventure continues with the college experience.

Nearly six hours away, the Noel sisters attended high school in Nederland, Texas, where they were both in the National Honors Society, as well as the French Honors Society. Being far from home can be intimidating, but Courtney explained: “When we came to TWU, I realized it was a home away from home and it was very comforting.” Caroline added: “Most of us are away from home and we become our own family.”

As identical twins, their new teammates had some cues to help them make distinctions between Courtney and Caroline. However, they seemed to have some difficulty when the Noels switched things up during practice. Caroline said: “During the first week of practice, we wanted to see if the team could tell us apart. Courtney is associated with headbands and I don’t wear them. So one day I wore a headband and Courtney didn’t and our teammates had to do a double take.” Courtney added: “It actually took them quite a while. They kept calling me Caroline and I was like, ‘nope.’”

Courtney, majoring in engineering, aspires to be a material engineer: “I want to end up working with make-up, if not making my own. Being a red head, I don’t find a lot of makeup that suits me, so I am interested in creating make-up that others with paler skin can use.”

Caroline is majoring in chemistry and has an interest in crystallography, a branch of chemistry that studies the structure and properties of crystals.

Courtney explains that playing volleyball in college “has been very intense, but I love it because everyone is just as sold on volleyball as you are,” and having her sister with her “is like having a friend who has your back at all times.” Caroline added they push each other to be better.