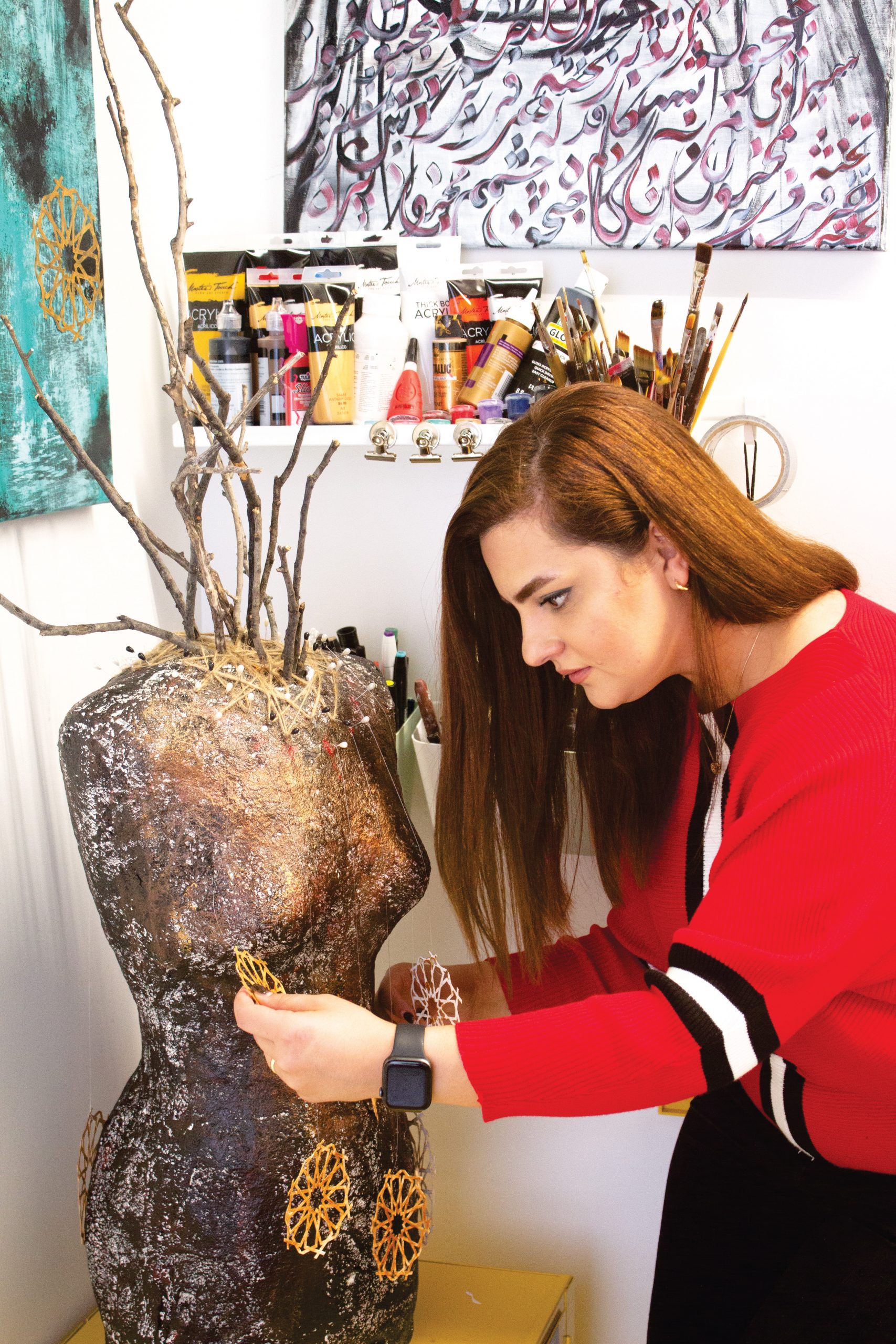 When first entering her art studio, you notice all the little things Hanieh Madanirad has done to make the space her own. The small succulents on the windowsill, the smell of a freshly brewed pot of coffee and walls covered in colorful, expressive works of art about her home country: Iran.

Madanirad, a first-year graduate student in the MFA Graphic Design program, moved to Denton from Tehran, Iran in 2016 with her husband who came here to pursue his PHD at UNT. After falling for the atmosphere and having it recommended by friends, Madanirad decided that TWU would make a good fit.

Madanirad began doing graphic design in 2003 and has been interested in art and design since she was very young.

“I think it is my responsibility to show what is happening to Iranian women,” Madanirad said.

“My art is about my experience in Iran, the government and Iranian women.”

As a graphic designer and fine artist, Madanirad uses her work as an outlet to express her frustration towards the Iranian government which, after the Islamic Revolution in 1979 became a theocracy.

Madanirad said her work focuses on the Iranian woman’s experience, specifically the compulsory hijab every woman is forced to wear while in public.

“It is just a scarf, but if you don’t cover your body and decide to show your body to society, that is considered unacceptable by the government, and they will be against you.”

First-year ceramics graduate student Hanna Selman easily picks up on the themes Madanirad is trying to express within her work. “[Madanirad’s] work is a very good depiction of resilience, strength and femininity” Selman said.

While the Iranian and American governments are clashing, Madanirad must stay in the U.S. and watch as her family and friends suffer through the political strife happening in Iran.

“I am very worried about the situation. I am not happy with the sanctions or my government, what they do to Iranian people makes me really unhappy. I worry about my people” Madanirad said.

Although Madanirad is worried, she turns to her love of art to physically manifest her concerns. Madanirad’s intention when making her art is that the viewer will “understand what is going on in Iran, that is it.”

Second-year painting and drawing graduate student Augustine Cordero said Madanirad’s work showcases a new perspective for him. “I feel like the work underlines an important part of that culture,” Cordero said. “There is definitely an insight into the perspective and that life, which a lot of us are not currently aware of what is going on over there. There is some overlap and things that are applicable to our culture, as well, so there is definitely something to be learned by the West in that respect.”

Madanirad advocates for the people to make change and urges individuals around the world to take an interest in the lives of others.

“The government knows how powerful women are in Iran and around the world, and because of that, they try to keep them from having power,” Madanirad said. “I wish all people around the world knew about each other’s cultures and hard situations because people can help and support each other.”

Anna Galluzzi can be reached via email at agalluzzi@twu.edu

Published in Community, Features and Lifestyle