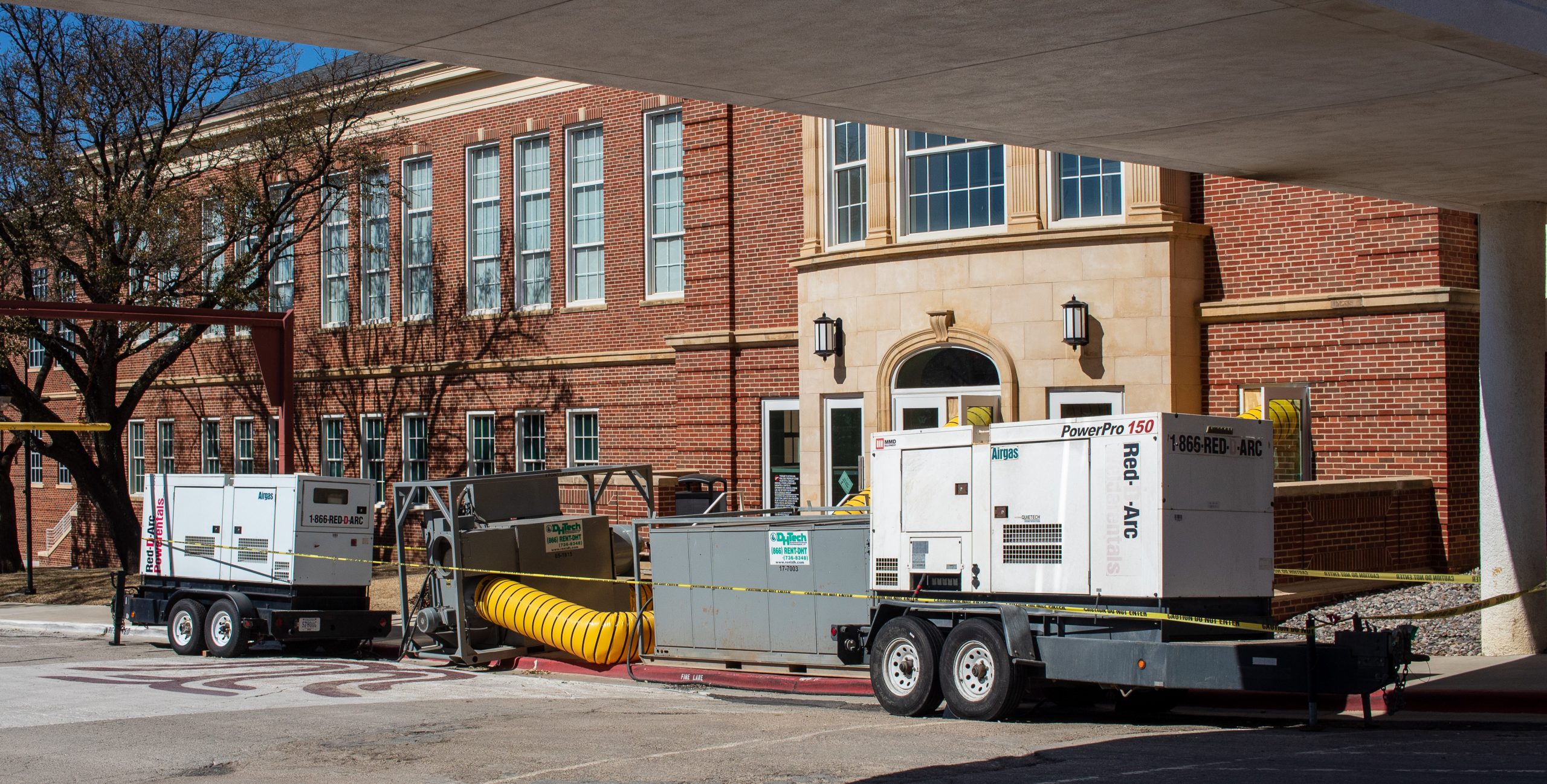 Over 100 residents at Texas Woman’s University were displaced after Winter Storm Uri brought damage to campus buildings — several of them residence halls — on the Denton campus last week.

Freezing temperatures caused pipes to burst and sprinklers in Austin and Sayers Halls in Lowry Woods to malfunction, which led to minor flooding in some rooms and created safety concerns that forced residents to relocate to Stark Hall or return to family homes temporarily, risk management executive director Matt Moustakas said. While 61 Sayers residents were able to return to their homes after contractors made repairs Saturday, 62 in Austin remain unable to.

Some students may also have left campus to return home before the storms hit, university spokesperson Matt Flores said. Though some rooms did have water leaks from broken sprinkler heads, the main cause of evacuation is the sprinklers not working, which could create dangerous conditions if a fire were to break out, Moustakas said.

“The priority is obviously housing and the sprinkler contractor worked really hard over the weekend to fix all the things in housing but Austin is still not fixed yet,” Moustakas said. “We were talking to our contractor today and he’s basically going to spend the first part of the day driving from sprinkler suppliers to sprinklers supplier trying to find the parts, because everyone else is doing the same thing since a number of broken sprinklers across North Texas.”

The lobby of Guinn and Stark Halls also saw flooding, with the C-store commons and computer cluster remaining closed for repairs this week. Like many across the region, residents faced dropping temperatures as the Electricity Reliability Council of Texas initiated rolling blackouts amid overload on the statewide power grid. Though many residential buildings have generators, they only power emergency lights, exit signs and select other functions, and were not capable of providing electricity to dorm rooms, Moustakas said.

“In Parliament, they have much bigger generators and because of newer codes, they’re required to run the fire pump and the elevators and things like that that aren’t powered, but is every room going to be warm and lit? No, that’s not how that’s not how those generators work,” Moustakas said. “They would have to be ridiculously huge generators, so that’s just not possible.”

As many as six other campus buildings are also closed as restoration contractors from Blackmon Mooring address building damage from broken sprinkler pipes or leaks from HVAC systems which caused water flow, Moustakas said. The CFO building, Hubbard Hall and the visual arts building sustained the worst damage, with several pipes freezing and busting throughout and more water flowing into Hubbard from the bridge that connects the building with Administration Conference Building, where another pipe burst, Moustakas said.

Facilities maintenance crews and custodians began working to clean up as much of the initial water as possible last week, but administrators are prepared to replace building materials that cannot be dried out properly or may present a mold risk, Moustakas said.

“The key is getting them [contractors] in and we have a relationship with this company, and they come in when we call versus waiting for several days, which is when you start having mold problems if the water stays too long,” Moustakas said.

Financial Aid relocated to rooms 116 and 117 of Brackenridge Hall amid the water that came from a sprinkler and fan coil leak, Moustakas said. Other buildings currently closed include all of ACT except for the first floor, the fine arts annex and the alumni house. Maintenance crews are also working to address other electrical anomalies that resulted from the storm, including a Department of Public Safety circuit breaker tripping, a laundry room in Stark not receiving power and keycards not working in several buildings, Moustakas said.

Outside of residential buildings, the university will work with contractors to prioritize restoring CFO and Hubbard to full operation, since both buildings feature large classrooms required for social distancing in many courses, Moustakas said. Though administrators hope most buildings will be reopened within the week, it’s hard to say if that will be possible with many scrambling for parts across the area.

“There are small things we had the contractor go ahead and take care of while they waited for other parts so it may not exactly get fixed in that priority order, but facilities is focused on CFO and Hubbard as far as making sure things are dried out, and there really aren’t that many buildings left,” Moustakas said. “I’m hoping this week but other than that, I couldn’t really say.”