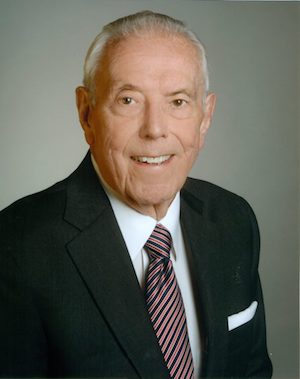 Former Texas Woman’s University regent George Schrader passed away due to COVID-19 Dec. 31 in a North Texas Hospital. A funeral service was held for Schrader Jan. 7.

Schrader served as regent for Texas Woman’s University for 12 years. He was first appointed to the TWU Board of Regents by Gov. Rick Perry in 2007 and was then re-appointed by Perry in 2013.

“George Schrader was the consummate public servant and such an endearing gentleman,” TWU Chancellor Carine M. Feyten said. “He was a remarkable mentor and called me every Monday while he served on the Board of Regents. His impact on Texas Woman’s University, the City of Dallas and other municipalities will be felt by generations of people, not only through his legacy of policy and infrastructure improvement, but through his graceful way of interacting with everyone.”

Before being appointed a regent, Schrader served as a Dallas city manager from 1973-1981 and previously served as city manager for Mesquite and Ennis. He also owned the Schrader Investment Company and was a principal for the accounting firm Schrader & Cline, LLC.

During his time as a Dallas city manager, Schrader played a role in the development of multiple projects such as the Reunion Arena, the Dallas-Fort Worth International Airport, the Dallas City Hall, the launch of the Dallas Arts District, the Dallas Arboretum and the Botanical Garden, and the expansion of the Dallas Public Library.

“My thoughts and prayers are with the Schrader family during this difficult time,” current Dallas city manager T.C. Broadnax said. “During his tenure as city manager, he played an integral role in the development of some of Dallas’ most iconic landmarks. His presence will continue to be felt throughout our city for many years to come.”

The Senior Source of Dallas awarded Schrader with the Spirit of Generations Award in 2013—an award given to those that connect people of all ages and support the community. TWU awarded Schrader an Honorary Doctorate of Humane Letters in August 2020.

Schrader also served on the board for Life Information, Inc., Baker University and Methodist Health System. He was a lifetime honorary board member of Circle Ten Council of the Boy Scouts of America.