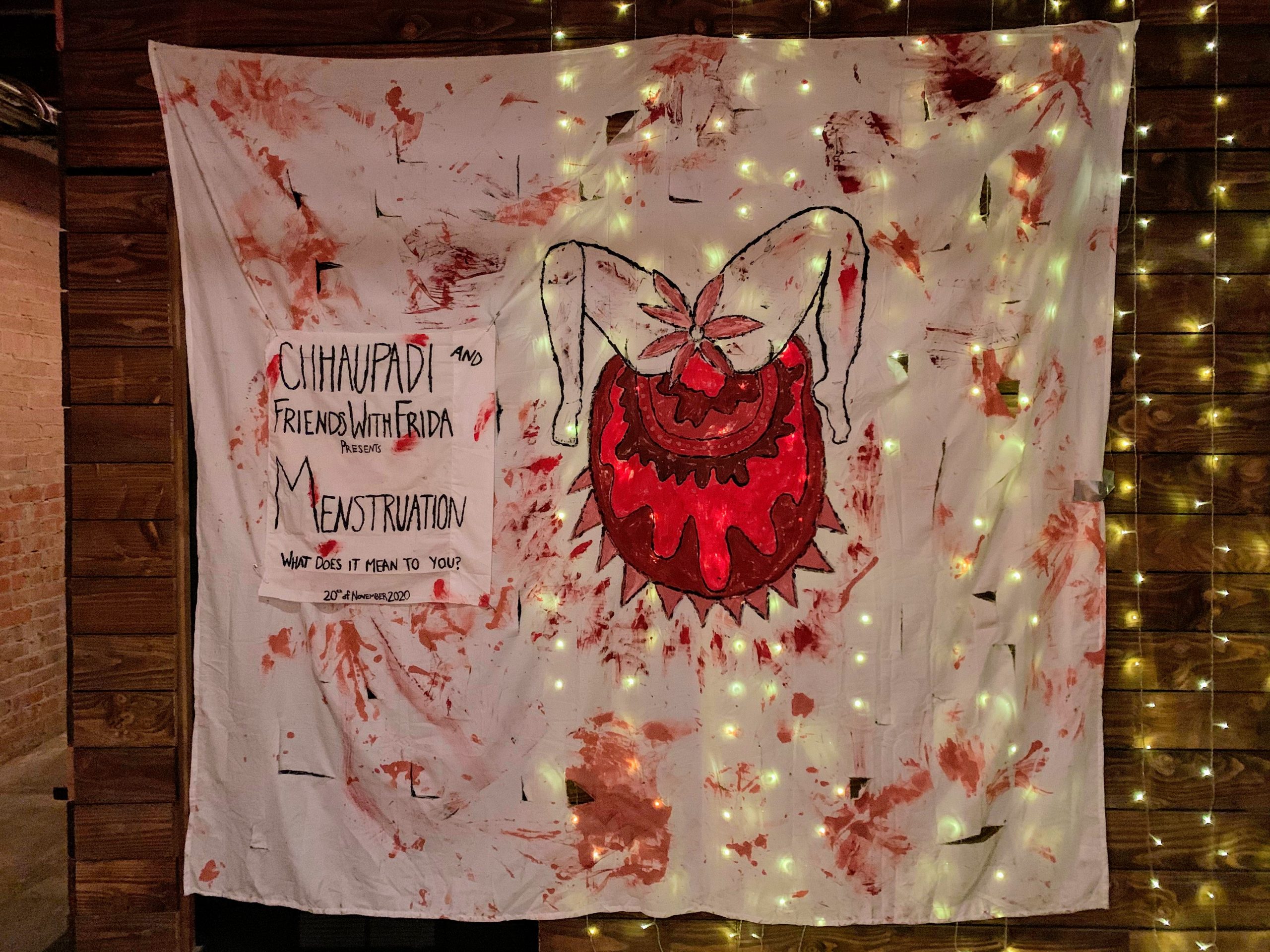 On a brisk Friday night, Dentonites gather at a local studio. The intimate space is filled with live music and art placed around the walls explores the meaning of what has long been considered taboo in certain spaces: menstruation.

Since February, a North Texas nonprofit group, Chhaupadi, has been working to raise awareness of period poverty and end the stigma surrounding menstruation. Chhaupadi refers to a menstrual taboo practiced in Western Nepal where women are forced into confinement during their periods. The group’s most recent event, an art show entitled “Menstruation, What Does it Mean To You?” held Nov. 20 at Studio E, was organized to help local women gain access to feminine hygiene products and challenge period stigma through community action.

Upon arrival, guests were welcomed to bring feminine hygiene products as donations and bid on the art pieces. There was a food truck parked outside, local vendors displaying their work were stationed just alongside the studio, and even a tarot reader was giving readings in a corner.

Much of the art honored the woman’s body, the womb and the power of menstruation. One of the bigger pieces, labeled, “Untitled,” featured a painted womb with a red ribbon-like shall that dangled from the canvas.

According to UN Women, 12.8% of women and girls around the world live in poverty, and taxes on feminine hygiene products leave them having to find tangible ways to manage their periods.

Due to cultural norms in certain parts of the world, women in some areas are forced to give birth in a hut endangering their health and well-being. Superstitions stigmatize menstruating women as dirty; it is believed they should avoid being looked at or touched for fear doing so may bring about a curse.

For organizer Jessica Nordon, establishing Chhaupadi was important not only in ending this stigma but also in ensuring women have access to their basic needs. Nordon’s organization provides feminine hygiene products to women in need in the DFW area and Nepal.

Nordon’s motivation behind creating the art show was to get the community involved in normalizing menstruation.

“The reason why I wanted to do this art show is because not that many people talk about menstruation,” Nordon said. “It’s hard for people to even say the word ‘period.’”

Chhaupadi partnered with Friends with Frida, a local non-profit organization that serves the homeless, to organize the event.

Nordon said collaborating with Friends with Frida allowed the group to be able to serve the community by providing feminine hygiene products to homeless women.

“Periods affect the homeless a lot,” Nordon said. “A lot of homeless women have to choose between a meal or a package of tampons. The average cost for tampons is about six to seven dollars, [and] for a lot of homeless people, they only make a couple of bucks a day.”

Xochitl Miranda, a founder of Friends with Frida, said that collaborating with Chhaupadi was a great way to show how communities come together and join causes.

“We’re hoping to put our name out there so people can see what we’re doing,” Miranda said. “I remember sitting down and trying to do my own art piece, and I remember a lot of anger coming up for me.”

Nordon’s passion for creating change has been inspiring, Miranda said.

“We’ve both started these things from the ground up, so it’s been amazing to watch her [Nordon] work,” Miranda said. “She has so much passion for this. She’s put her heart and soul in this – this is mostly her baby.”

The show had a good turn out, Nordon said, and with COVID-19 restrictions, masks and social distancing were maintained in the intimate space without it feeling overcrowded.

Nordon said she hopes to end the inequality of menstruation in the U.S. and in places like Nepal by creating a sense of open-mindedness. Nordon and Miranda said that they hope that others know that they can make a difference and help their community, too.

For those who wish to get involved with Chhaupadi and their local efforts, follow their Instagram @chhaupadi. Friends with Frida can be found on their Facebook page FriendswithFrida.