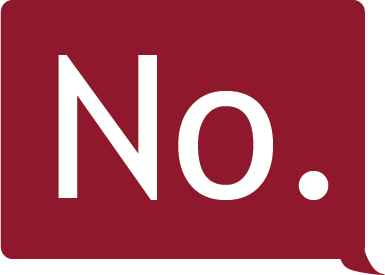 Personally, I struggle with saying “no” to anyone. If I do say “no,” it’s usually followed by “I’m so sorry” or “Next time, I promise.” Honestly, this is not a good way to go about responding to people’s requests. No matter who it is- an employer asking me to work more than I actually can, a friend asking for a favor or someone outside of a store asking for a handout- I struggle so much with saying that simple two-letter word.

Always agreeing to help out those around you may seem like a nice thing to do, at least until you have so much on your plate you can’t even stand. When tasks keep piling up, stress begins to set in and slowly grow.

According to Psychology Today, the reason most of us never say “no” is because we fear conflict. I know if I could avoid conflict, I would at all costs. Sometimes we avoid saying “no,” because we fear that it will make the other person feel as if we do not care for them or that we do not want to help them. When asking others for help, we tend to forget that they have their own life and forget that, sometimes, they have too much stress to take on something else.

Even when we are children, we are usually taught to obey those above us: teachers, parents etc. This is when I believe it gets hard for us to say “no.” Growing up, I was a very good child. I never got in trouble at school or disobeyed anyone older than me. I was scared to cause any drama or issues. That followed me to my adulthood.

I also feel that saying “no” can be harder for females. I feel that we, as women, have a more nurturing side that makes it even harder for us to say “no.”

Even though I struggle with saying “no” so often, I have made it to where I say “no” more than I used to. Now, whenever someone asks me to do a task for them, whether it be at work, school or family, I check myself. I check to see what I already have going on. I make sure that I would have time to do whatever the task may be. I also take into consideration whether I actually want to do the task. This is when it gets hard. I find that even when I don’t want to do a task for someone, I will still tell them “yes.” I try to stand firm in my decision of saying “no” so that I do not get overwhelmed.

Those who truly care for you should understand you telling them that you cannot help them sometimes. They should understand that your own stress and emotions should also matter, no matter how important their task for you is. Practice saying “no” as much as you can. You don’t have to live a “Yes man” lifestyle.