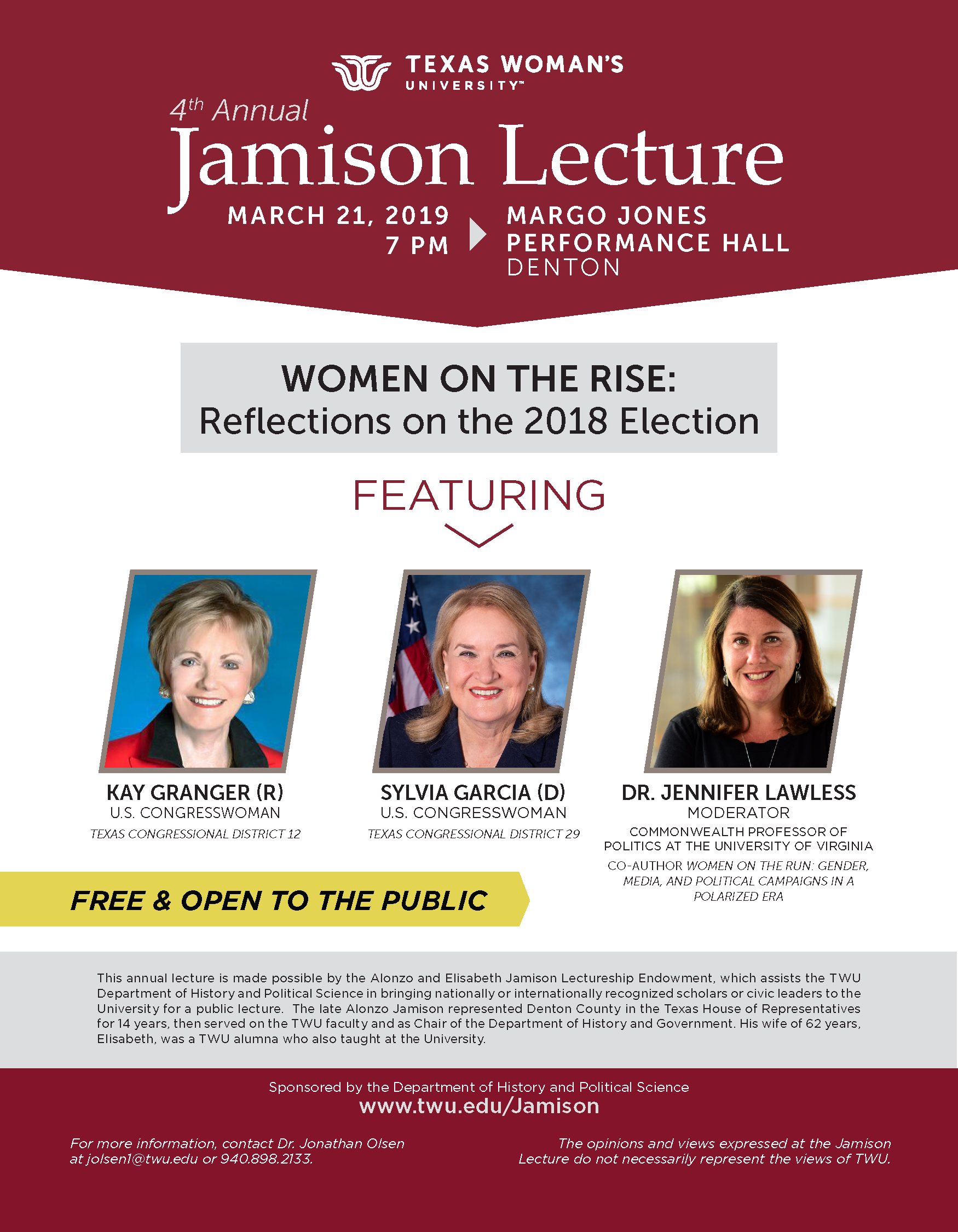 A record 117 women were elected in 2018, prompting many to dub it the “year of the woman” – a notion that has helped inspire the theme of at least one upcoming lecture series this semester.

Texas Woman’s University will host the fourth annual Jamison Lecture, “Women on the Rise: Reflections on the 2018 Election,” Thursday, March 21. The event will begin at 7 p.m. in the Margo Jones Performance Hall on TWU’s Denton campus. This year’s featured speakers are two Texas congresswomen, Democrat and TWU alumna Sylvia Garcia, and Republican Kay Granger. Dr. Jennifer Lawless, professor of politics at the University of Virginia, will moderate the panel.

The lecture series, made possible by an endowment fund from late TWU faculty member and Texas State Representative Alonzo W. Jamison, is aimed at bringing civic leaders to campus for discussions with TWU community members and the public.

Dr. Jonathan Olsen, professor and chair of Texas Woman’s University’s history and political science department and lead organizer of the event, said this year’s theme was a natural result of the 2018 elections.

“It seemed very appropriate because this was a year in which women won a record number of offices at the national level, and it was a big theme in the election about the place of women and the ‘me too’ movement,” Olsen said. “The only question was how to frame this.”

Organizers are still working on finalizing those details, according to Olsen, who said that the hectic schedules of the speakers caused some delays.

“The challenge this year has been that, because politicians have a very varied schedule, it’s hard to plan ahead with them,” Olsen said. “So we didn’t even confirm this until about two weeks ago that they were able to come, so now we’re kind of scurrying around trying to get everything done.”

Olsen also said, however, that he does not anticipate those delays will impact turnout. Olsen said that event coordinators have seen steady increases in attendance since the inaugural lecture three years ago, prompting them to move it to a larger venue.

“It’s grown over the years,” Olsen said “We had a little over 200 people the first year we did it. Last year…we had about 400 people show up for that one. This year, we’re hoping for an even bigger turnout because we’re using the Margo Jones Performance Hall and that’s a big space.”

Despite the growth in audience attendance, Olsen said garnering attention for the event is not without its challenges.

“It’s a little hard sometimes in Denton because people think about going from Denton down to Dallas or down to Fort Worth for an event, and people in Dallas and Fort Worth don’t often think about coming to Denton for the events,” Olsen said. “It’s always a little bit of a challenge, but I think we can have a good turnout this year.”

With greater public participation has come new challenges that are prompting event coordinators to reassess how they approach audience feedback. Like many open-forum panels, Olsen said the organizers of the Jamison Lecture are considering screening questions from guests to streamline future discussions.

“We had a few more challenges last year – not necessarily problems with the questions themselves but just making sure it’s smooth, and people have an opportunity to ask questions, but they also know you can’t go on a speech,” Olsen said. “So we’re going to talk a little bit about how we handle that as a committee. We want, of course, vigorous dialogue and vigorous opinions to be shared…but it’s all got to be within a respectful dialogue about these kinds of things.”

“We might,” Olsen said when asked to confirm that this year’s questions would be prescreened. “The how is the question.”

The event features women of different political backgrounds, a tradition that Olsen said is deliberate.

“Having dialogue between these women representing two different parties and two different ideas and visions – I think that in and of itself is very valuable because it’s important modeling what positive political dialogue looks like, especially in an age where we are quite polarized,” Olsen said.

Although awareness of ideological differences persists, partisan issues are not meant to be a focus of the series, according to Olsen.

“Of course, you can’t take political competition out of it, and you wouldn’t want to,” Olsen said. “At the same time, the lecture is envisioned not as a partisan event in any way.”

Olsen said he thinks the Jamison Lecture plays an important role in encouraging young women to be politically active by presenting role models that aid women in envisioning themselves as political leaders. Organizers hope to carry the momentum from the recent election forward in efforts to increase political activity among students.

“I think it has a powerful effect because…just having two representatives who are modeling what it means to be a woman politician I think is important and powerful,” Olsen said. “I think that discussions about what happened in this last election and the way that women were empowered to run for office, we want to continue to carry that message forward – very important overall, but I think especially important for TWU.”

Olsen said that, in his view, recent increases in political representation among underrepresented groups could signal a changing political landscape, a sentiment embodied by this year’s theme.

“I think the fact that so many women and minorities won representation this time means that some of those hurtles are being overcome…so I see it continuing to go forward,” Olsen said. “I definitely think it’s on the upswing.”