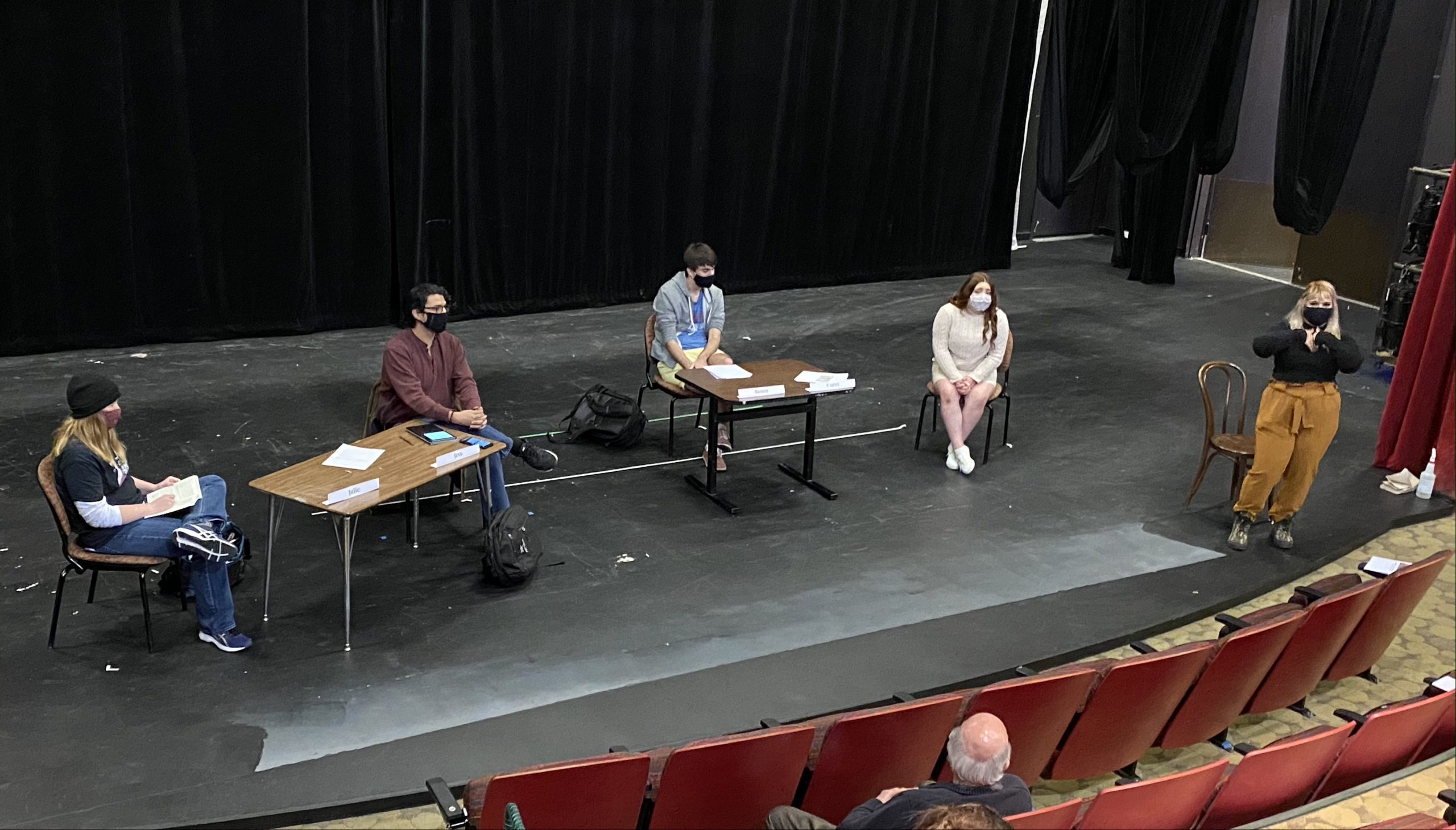 “How’s everyone feeling?” graduate student Talia Gritzmacher asked the handful of people in the audience at the Redbud Theatre Saturday evening. “It’s pretty heavy stuff. If you need to breathe and shake it out, I encourage you to do that.”

The performance was the first for TakeBack Interactive, a four-person interactive theater troupe led by Gritzmacher, who created the group as part of her master’s thesis. The hourlong performance, “Student with ‘Benefits,’” addressed invisible disabilities and the dynamics of privilege. Acting as facilitator — a role unique to the type of play the group performed — Gritzmacher moved between addressing the audience and the characters on stage, helping each group navigate the difficult scenario the troupe devised.

Interactive performances, based on Augusto Boal’s Theatre of the Oppressed, hold that theater is not just for entertainment, but that it can play a role in promoting social change. Gritzmacher, who has worked as a graduate assistant on the Interactive Theatre Troupe led by professor Noah Lelek, wanted to create her own interactive project that would focus on the audience participation portion of interactive theater known as talkbacks.

The plot centers around four students assigned to work on a group project together: Julie (played by graduate student Katherine Weber), whose lack of a filter is due in part to her being on the Autism spectrum, unbeknownst to her peers; Jess (recent graduate Alexander Delacruz Nunez), whose difficult experience navigating college as a hard-of-hearing student left him jaded; Benny (originally Andew Carroll, who Ryan Diller filled in for during the performance), a gay student who takes on the role of mediator in the group; and Corey (theater education freshman McKenzie Mitchell), a soft-spoken girl with epilepsy.

After Corey’s late arrival sets Jess off — she had to have an emergency CT scan, she tells the group — Jess and Julie’s bullying of Corey for what they say is special treatment she receives from the professor snowballs until the meeting dissolves, leaving Julie to start the project alone.

The overarching goal of interactive performances like these are to get the audience thinking about how microaggressions can lead to situations like the one modeled by the troupe, Gritzmacher said. Performances created in the vein of Theatre of the Oppressed consider audience members “spect-actors” who play active roles in analyzing and tackling the issues addressed in the performance.

Though Saturday’s scripted performance only lasted about 10 minutes, the rest of the hour was devoted to audience interaction. Spectators questioned the characters about their motivations and how their own experiences drove the interactions they had with the rest of the cast. One audience member was given the opportunity to intervene as a fifth character, who tried to affect the outcome of the devised scenario, after which audience members got to question actors about the process of creating the script before the performance closed.

“The characters, all mess up on some level or all flawed on some level, and it’s fairly heightened in ITT,” second-year theater graduate Katherine Weber, who plays Julie, said. “The point is to show the audience where these characters are going wrong, so that they can learn what’s a better way to approach a delicate issue.”

Gritzmacher put out a call for auditions in September. Though she didn’t know exactly what subject matter the script would tackle apart from privilege, the group quickly realized they wanted to explore disability advocacy when three of the four cast members revealed they have invisible disabilities.

“I think that actors and students have this amazing perspective that doesn’t always get brought to the forefront because of those strict theatrical, traditional rules,” Gritzmacher said. “So, I left it really open-ended, and then it just happened to be that we had three of the four cast members identify as having disabilities of some sort, and I have an older brother with autism and hearing impairment, so that was something I knew a lot about as a sibling. It all just seemed like magic, like it all just flowed together perfectly.”

Actors improvised the first session before creating the script they performed Saturday, the dynamics of the characters inspired by the cast’s lived experiences.

“We were given kind of this framework for the improv session we did, and we were talking about accommodations and bureaucratic red tape, and people not really understanding if you need the accommodation,” Weber said. “What ended up being born out of that was so crazy because we each kind of naturally took on characters that we hadn’t really discussed beforehand.”

The actors also created in-depth biographies for each of the characters, so they could demonstrate their character’s motivations when spectators asked questions.

“It makes it a bit more real for them, when we know what school they went to, where were they born, all these different types of things,” Nunez, who graduated with a B.A. in Theatre in May, said. “That way they’re [the audience] like ‘Oh, OK, these are actual people.’ It also influences the way we interact with our co-actors and the audience, as well.”

The final script the troupe devised ended up being tamer than the improvised version, Weber said. And though COVID-19 created less-than-ideal conditions for rehearsals – like his character, Nunez is hearing-impaired, making virtual meetings difficult – actors said the troupe’s willingness to show up for one another made the process worthwhile.

“It’s a really empathetic group,” Weber said. “Talia is a great leader and the other three are just so sweet and understanding, and we’re good about listening to each other. I think that’s what’s made this project so good, is that we’re willing to hear each other.”

Seating for the closed performance was limited to 20 people to allow for social distancing, and there was no intermission to limit contact among spectators. Though Gritzmacher is happy the troupe was able to put on the performance, she said the cast originally envisioned a longer performance that would also model privilege dynamics related to disability in social and work settings. Though she’s not sure what next semester will hold — partly because of COVID-19 — she hopes the show will go on, with the troupe either performing the same script or tackling a new social justice issue. The most important thing, troupe members say, is to keep raising awareness.

“It happens on college campuses — people have disabilities and it’s invisible, and you don’t necessarily know how to talk about those things, or bring them up in a fair way,” Gritzmacher said. “And so, I think it’s really important to kind of bring that to people’s attention. The person who’s getting special help, they might have something that you don’t know about, and so finding out how to be an ally and not judge those people and understand them, you know, it’s really important.”

Featured image: Cast members listen on as performance facilitator Talia Gritzmacher addresses the audience during the “Student with ‘Benefits'” play at the Redbud Theatre Dec. 4. Photo by Amber Gaudet.

Published in Entertainment and Lifestyle