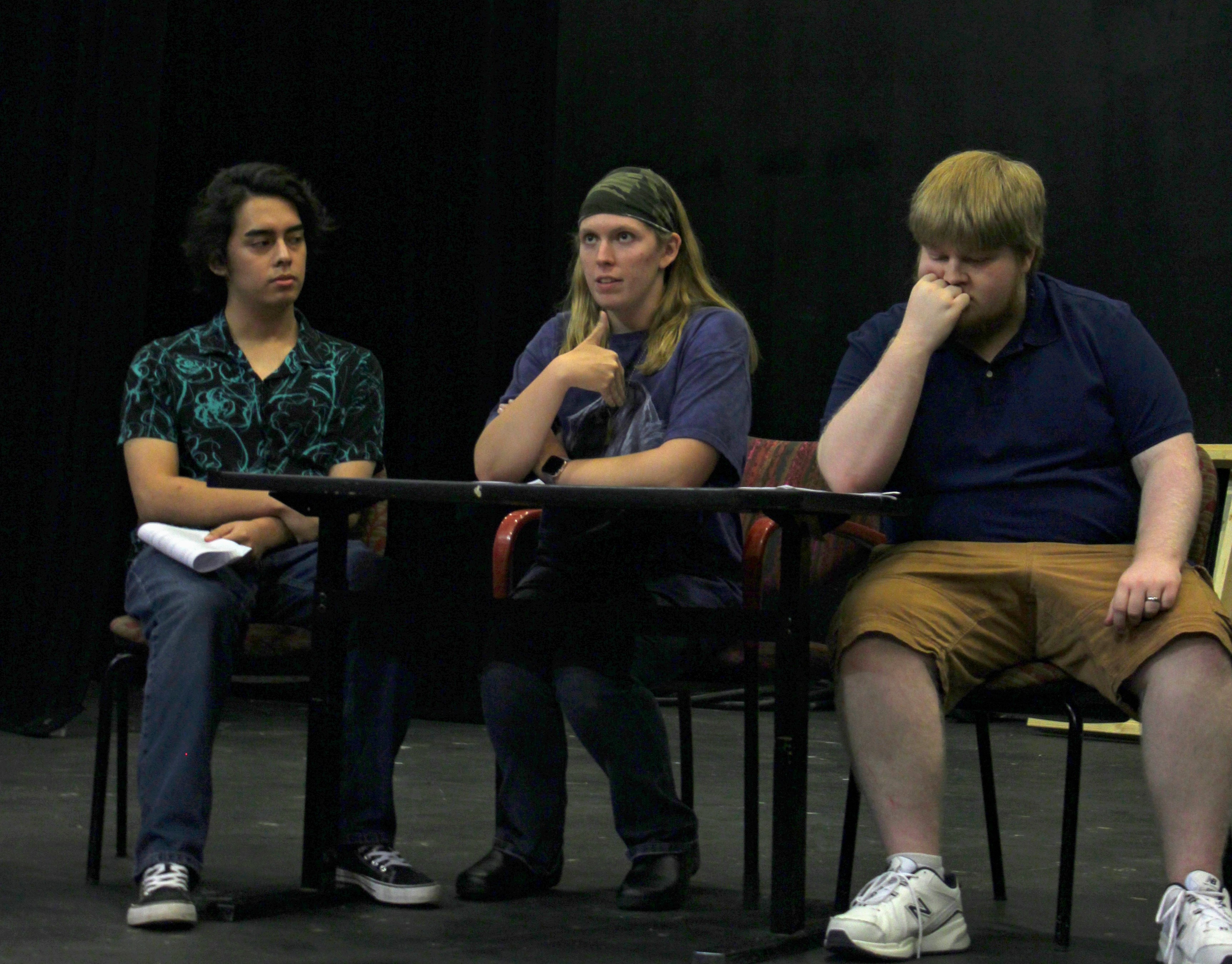 The space just outside Texas Woman’s University’s Redbud Theatre Rehearsal Studio is hushed Thursday evening despite being filled with hopefuls waiting for their chance to audition for the only Interactive Theatre Troupe in the Dallas – Fort Worth Metroplex.

Created and directed by theater professor Dr. Noah Lelek, the Interactive Theatre Troupe is aimed at creating dialogue about sensitive topics and educating the TWU community about issues like diversity, sexual assault, victim blaming and microaggressions. Lelek auditioned 14 would-be cast members Sept. 5 to fill open spots in the 20-member troupe, which has performed for campus departments, at conferences and at the 2018 Council of Colleges of Arts & Sciences in Chicago, Illinois.

The troupe is based on Brazilian theater practitioner Augusto Boal’s Theatre of the Oppressed and Forum Theatre, which Lelek first became interested in while working toward his master’s degree.

“When I was working on my MA, I did work in counseling and psychology [and] one of my first experiences with the theater for social change is one of my professors in undergrad took us to the federal medical prison in Springfield, Missouri,” Lelek said. “We had to play games and write with the inmates, and it was obviously a scary experience, but it showed me that you could make a difference with theater, it’s not just for entertainment.”

Lelek said the act of using theater to spark transformation has remained an important part of his life’s work, informing his decision to create a group he feels has a positive effect on the TWU community.

“I direct traditional plays and musicals, but I really like things that have a social justice sort-of background and can actually change people and change the dynamics of the world through theater, and I think this does a good job of it,” Lelek said.

Performances open with a traditional 5- to 10-minute play, followed by “talkbacks” which allow audience members to interact with characters, questioning their motivations and backgrounds. Attendees can then come onstage and attempt to solve the dilemmas the script presents.

Lelek said the talkbacks are important to the experience of attending an ITT play because they prompt audiences to move beyond kneejerk responses to the situations presented in the script.

“In instances of sexual assault and diversity we don’t get to hear everybody’s specific viewpoint,” Lelek said. “I think it’s important for students and faculty to understand there’s gray areas really in everything. It’s not ‘this is a bad person, this is a good person,’ it’s that all of these people have made mistakes.”

Lelek said the interactive aspect of what ITT does helps foster understanding and empathy among viewers and enhances the educational experience.

“It’s hard to talk about those issues, and typical lectures aren’t as engaging and emotional and sort of right in-your-face,” Lelek said. “When you’re dealing with someone onstage who has been sexually assaulted – their character –  you get to hear their story and how they’ve dealt with it versus sort of just hearing the data about what happens. It makes it a lot more personal for the students.”

Talia Gritzmacher, Lelek’s assistant, said she has seen the impact of the troupe’s performances firsthand.

“I think ITT creates a platform where it makes it OK to ask questions about these sensitive topics,” Gritzmacher said. “Just having a place where these questions can be talked about and it’s OK, there’s no wrong answers, I think has really been beneficial.”

As for the actors themselves, they say the professional experience working in ITT provides is just one of the many benefits.

“Seeing the faces and the reactions is what gets me every time,” Alexis-Marie Garay, art junior and former theater major, said. “Because most of our stuff is so sensitive and raw that it impacts a lot of people, and that’s what I love about it.”

Alexander Delacruz Nunez, a senior theater major who has been with ITT since its inception, said the close-knit connections among members has made him feel at home in the troupe.

“It sort of has this weird challenge with my disability, during the talkbacks I often misinterpret things,” Nunez, who is hearing impaired, said. “But regardless of that, it sort of made me realize that a lot of people are willing to help me. That’s one of the reasons I’ve stayed.”

Troupe members say helping others is just as important as helping one another. Although Garay and Nunez say being part of ITT is more fulfilling than they may have anticipated, they are proud to embody the spirit of the troupe.

To learn more about ITT, visit the group’s webpage.

This article has been updated.

Featured Image: Jesus Gonzalez (left), Katherine Weber, and William Clark answer questions as the characters they are portraying during auditions for the Interactive Theatre Troupe at The Texas Woman’s University in Denton, Texas on September 5, 2019. Photo by Sarah Pham.