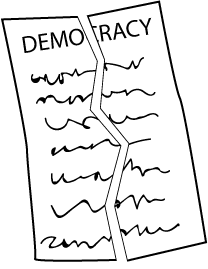 Over the last several years, student media outlets – many of them century-old institutions – have faced progressive budget cuts which, if they continue, threaten to silence student voices in the ongoing conversation that is American democracy.

Newspapers have become synonymous with one prolific, dreaded phrase over the last decade: budget cuts. As profit losses have forced massive layoffs at national outlets like HuffPost and Vice, the changing media landscape is also reflected in student organizations that have faced similar reductions.

In the latest local example of industry cuts, UNT’s student-run newspaper, the North Texas Daily, which has been in operation since 1915, faced the Student Fee Committee Feb. 1 to argue against proposed plans to reduce the paper’s reliance on student fee funding over the next three years.

Threats to cut fee funding to the media outlet and the student radio station – KNTU – come on the heels of a nearly $28,000 loss in funding for 2018 and a decision by the committee to cut staff wages by 14.6 percent, according to an article in the Daily.

TWU’s 104-year-old weekly newspaper, The Lasso, has met similar fiscal challenges, having lost nearly $10,000 from its annual budget since 2015. Budget cuts have forced reductions in the number of staff and the frequency of print editions, which have been decreased from weekly to monthly runs. The organization can no longer afford to attend Texas Intercollegiate Press Association events or employ a full-time photographer or adviser.

Even as university newspapers become increasingly vulnerable through funding losses, they have become more critical than ever to both campus life and local communities.

Student media’s worth is exemplified in, and goes far beyond, the leadership skills and career experience that staff gain by producing a paper or running a broadcast program. Student media serves as the eyes and ears of college campuses, checking authority and providing news that is accessible and relevant, as only student-run outlets can. Campus news organizations give students a voice, both through the staff and reader submissions, and – especially important in today’s political climate – are a powerful tool in teaching them to become informed citizens.

Yet, without the resources to continue to provide high-quality content, news organizations cannot prosper.  Universities set media outlets up for failure when they expect staff to produce content that pays for itself while operating on a shoestring budget. These same staff members are expected to not only produce high-yielding content with fewer and fewer resources, but they are expected to do so for little to no pay. More than that, budget cuts threaten the independence of these outlets as they are forced to become beholden to advertisers or look to other sources of funding, potentially compromising the media’s role in prioritizing truth.

We need student media, not only as aspiring journalists but as citizens. The value that independent journalism provides cannot be measured in terms of profit but in terms of impact. Breaking news stories at student-run newspapers have been picked up by professional news outlets; have exposed corruption where it hides; and have connected the students, the faculty and staff and the local communities they call home.

Just as the need for independent, citizen-focused journalism continues to grow in a profit-driven national news model, the necessity of independent, accessible, student-produced media is ever-expanding in the world of fake news and polarized sensationalism.

Only when we acknowledge the media’s inherent worth and invest in keeping news organizations resource-rich and independent can we hope that the news can serve the public good. Only by reinvesting in journalism do we stand by the lofty ideals of its humble beginnings:  to hold the powerful accountable, to inform the public in a relevant, impactful way and, especially, to protect the fragile institutions of democracy.