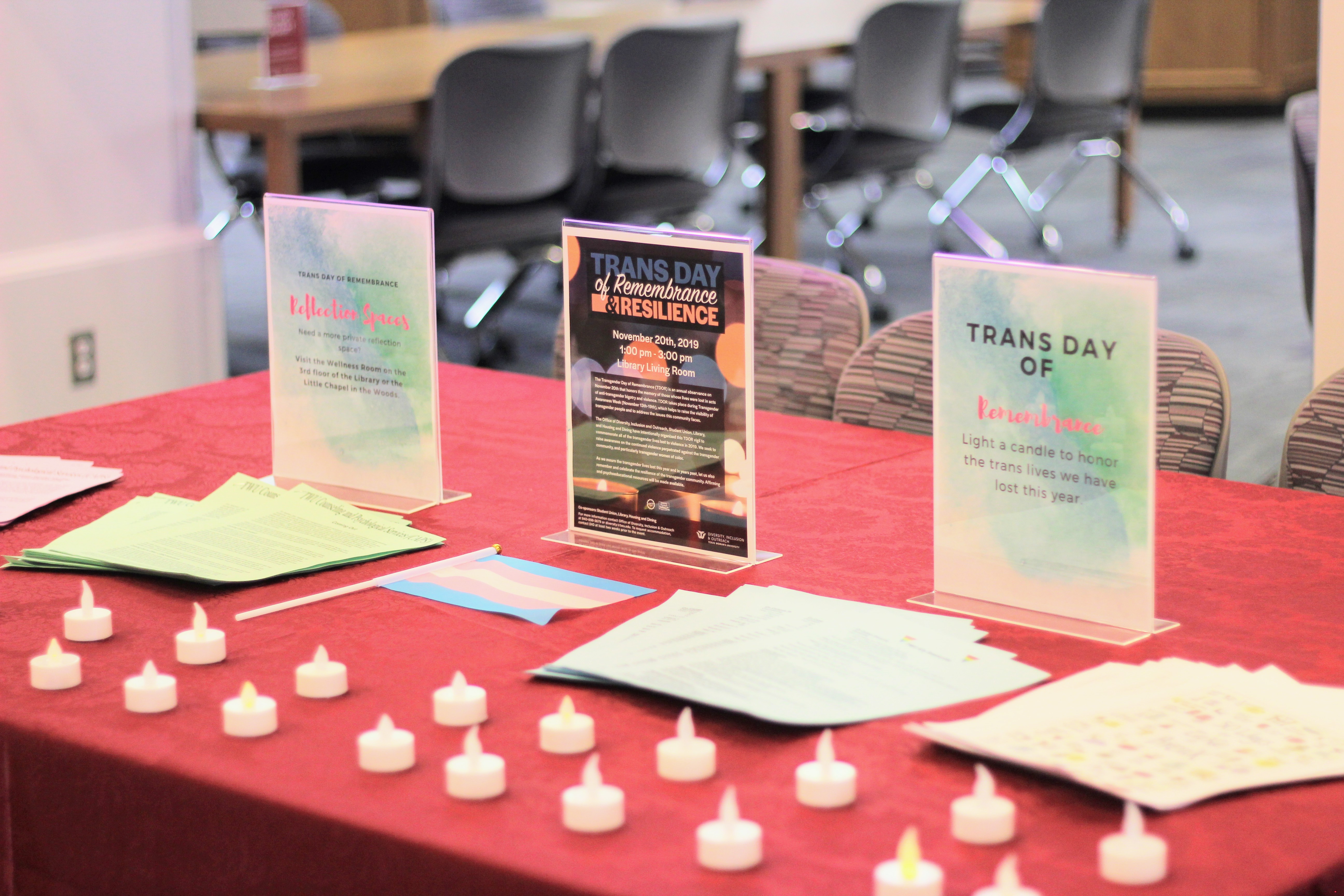 These are just a few of the 331 transgender people murdered within the past year who were remembered this Trans Day of Remembrance. Of these, four were murdered in Dallas alone. Five in Texas. Thirty-eight in the USA.

Trans Day of Remembrance is an annual international day dedicated to remembering and honoring the lives of transgender people lost to transphobic violence. The first official TDoR was in 1999, held by transgender activist Gwendolyn Ann Smith to honor Rita Hester, killed in 1998.

“Transgender Day of Remembrance seeks to highlight the losses we face due to anti-transgender bigotry and violence,” Smith said. “I am no stranger to the need to fight for our rights, and the right to simply exist is first and foremost.”

Vigils are held worldwide to remember the lives lost. In Denton, the Denton Unitarian Universalist Fellowship held a labyrinth walk and vigil on November 20, the official TDoR. Texas Woman’s University held their own event to honor the day.

The TDoR set up was located in the living room of the Blagg-Huey Library and featured a table with plastic candles that could be lit by attending students, along with packets of resources. A looping PowerPoint was displayed by projector, listing all 331 names of the victims sorted by countries of origin.

“We try to have something every year to recognize our trans community and really bring awareness to how many victims there are,” Nichole Lantis, student union programming specialist for TWU, said. “Especially trans women of color – the rates are just insane. We really want to bring that awareness and let our trans students especially know that they have support here at TWU.”

TDoR takes place during Transgender Awareness Week, a week aiming to raise awareness about transgender issues.  In honor of the week, DUUF held a trans awareness panel Nov. 17 featuring four transgender and nonbinary speakers who spoke on their experiences.

“The more people see us, and we are represented more, I think they’ll become more comfortable with us,” Tracy James Jones, panelist and transgender activist, said. “Because we are just people just like anyone else.”TWU has two organizations for LGBTQ+ students and staff: Freedom Truth Seekers: LGBTQ+ and Allies Support Group and TWQ: Affinity Group for Faculty and Staff. TWU’s Counseling and Psychological Services also has resources available for LGBTQ+ youth.

Featured Image: Signs and candles honor those lost to violence during the Transgender Day of Remembrance at The Texas Woman’s University Blagg-Huey Library in Denton, Texas Wednesday, Nov. 20, 2019. Photo by Sarah Pham.