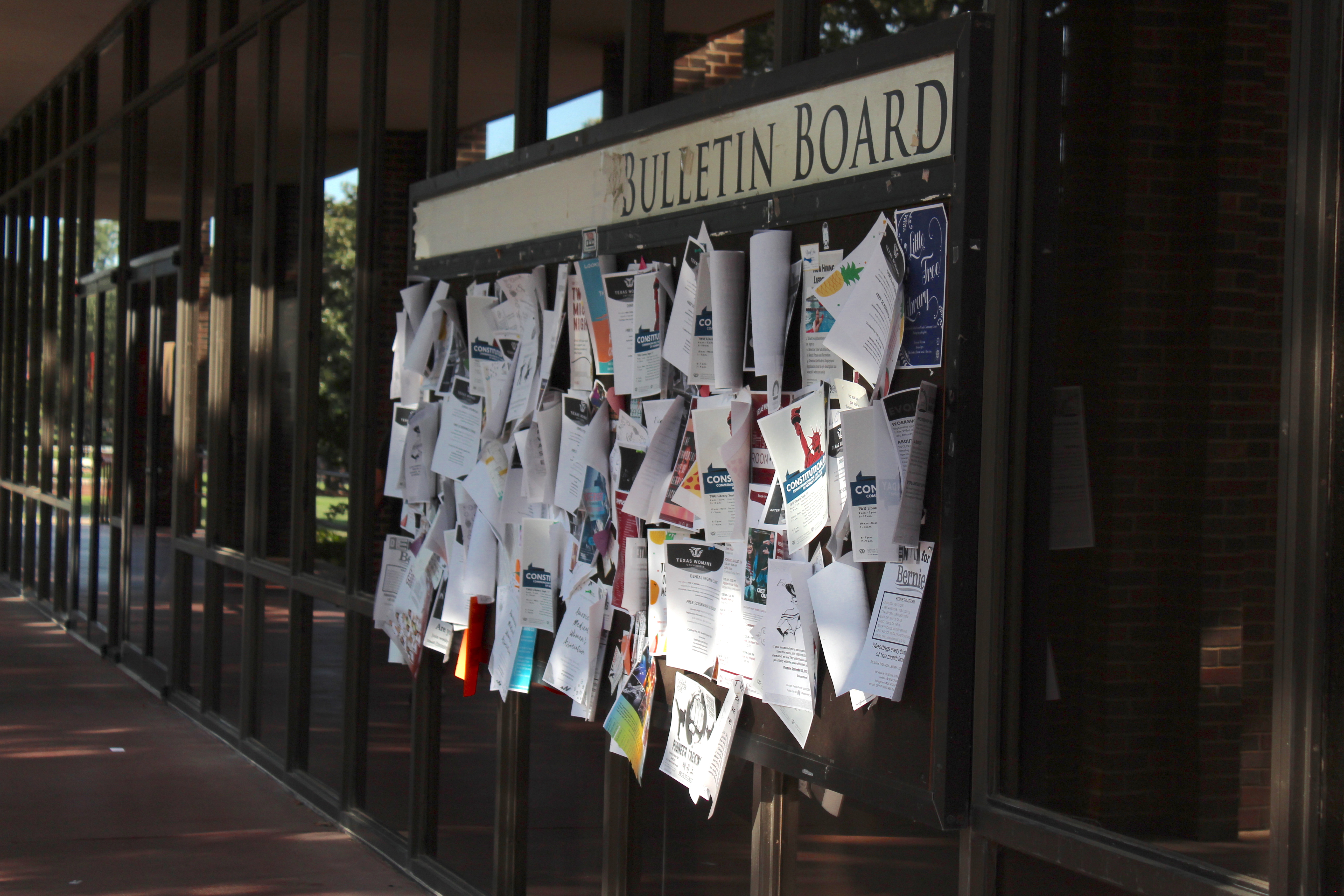 The free speech policy at Texas Woman’s University is undergoing a year-long renovation in response to the new bill passed by the governor at the beginning of the month.

Senate Bill 18 took effect Sept. 1, giving Texas universities until Aug. 2020 to address the bill’s legislative changes in their current free speech policy. Chief among these changes is the requirement that institutions of higher education allow all common outdoor areas of campus be used as traditional public forums, resulting in the removal of all TWU “Free Speech Area” signage and white tape being put over “Free Speech” on the bulletin board outside the student union.

“First, we’re going to try to see what the other institutions in Texas are doing,” Dr. Stephanie Krauth, associate vice president of Student Affairs, said. “There’s some other institutions across the country who really had some challenges with this, so the ones who had challenges have learned the lessons. You always want to learn from the people who have learned the lessons.”

Krauth said bills like S.B. 18 have been passed in other states, but Texas is just now getting to it, and there are mixed feelings on whether the bill will make an impact at TWU.

“As far as actual changes in the way that TWU students can exercise their free speech, I’m a little bit skeptical of people saying that this is going to have a huge impact, truthfully,” Dr. Parker Hevron, Associate Professor of Political Science at TWU, said. “It does, sort of, get rid of this idea of free speech zones and makes, kind of, everywhere on campus a free speech zone. Practically, I think that may control that they [students] can exercise their freedom of speech with an audience  – that may make it a little difficult for them to do that just because they know that onlookers and people who are affiliated with the university – they won’t know that there’s one place to go to hear people speaking, so as a result, it may mean that there’s less vigorous use of that particular areas as a free speech area if everywhere is considered a free speech area.”

An anonymous source who had been posting signs advocating for free speech at TWU around the Denton campus and organizations like FIRE, an advocate for campus civil liberties, believe that the bill is raising important issues that TWU has not been in compliance with. An article posted on FIRE’s website specifically targets TWU for “quarantining students’ expressive activities,” stating that S.B.18 is “making important strides in ensuring First Amendment rights,” as Texas becomes the 17th state to enact campus free speech legislation.

“I think that the bigger thing the bill is trying to do is to keep universities from responding to criticism about inviting conservative speakers to campus, and I think that was the idea,” Hevron said. “I think, UT Austin, in particular, was right in the crosshairs of lawmakers when they were writing this bill. To be honest, I don’t know if it’s going to have much of an effect on TWU, at all.”

Hevron said the political motivations behind the bill are reflective of recent events on Texas college campuses where Republican politicians and speakers have been interrupted and or turned away due to protests from the college communities, such as Texas Southern University in Houston and Texas A&M University. Because TWU does not frequently host or have issues with politically motivated speakers, Hevron said he doesn’t believe that TWU has reason for concern.

“I don’t think, necessarily that we have a lot to worry about,” Hevron said. “I am pretty firmly a believer that universities are not in the business of silencing speech  – whether it’s conservative or liberal – and that conservative politician fears that conservative voices are being muffled on campus – I think that those fears are incredibly overblown.”

Misty Wade, junior special education major, feels similar to Hevron in that this new bill will not have much of an effect at TWU.

“I know in the 90s at UT Arlington, there was a little square where you could come and say whatever you wanted, and it was almost kind of a spectacle – it wasn’t a big deal though,” Wade said. “In classes and stuff, it has really more affected me at my community college. Things got crazy – mostly people complaining about their free speech being infringed upon – but then they’d say wildly outrageous ideas, but we’re all adults, and I think it’s ok [for free speech to be expressed in any common outdoor area].”

Free expressions of ideas, outrageous or not, can lead to hostile situations even when protests are initially respectful. Potential security risks are what Krauth said she and others will have to consider while preparing TWU’s new free speech policy.

“One thing I know that some of our faculty are worried about is like last year at the drag show, so now we can’t contain them in the free speech zone,” Krauth said in reference to protesters who used a speaker to protest against homosexuality in the free speech area during last year’s drag show. “They [protesters] will be able to go outside wherever it’s being held. So, if it’s held in Hubbard for example, they can be in this area protesting and that’s something just as an institution we’re just going to have to address as we get going.”

Krauth said she will be heading up the process of updating TWU’s free speech policy, which will be completed by Aug. 2020.

Katelyn Garst can be reached at rgarst@twu.edu.