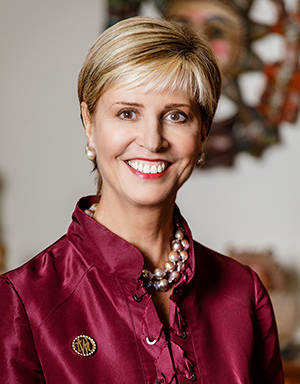 The award, which recognizes outstanding contributions to the progress of Denton, was announced during the Chamber’s 111th annual awards event.

“Dr. Feyten’s timely leadership and subsequent actions have raised the visibility and impact of Texas Woman’s University within the Denton community, regionally and nationally,” Erica Pangburn, the Denton Chamber’s president, said. “We are honored to celebrate her work and the example she sets for excellence.”

The award is named for a former top executive at the Denton Chamber and has been presented annually sine 1960. Other individuals with ties to TWU, including John Guinn and Mary Evelyn Blagg Huey, have received the honor in previous years.

“This award is particularly meaningful to me because it demonstrates the university’s true value to the community — something I am especially passionate about,” Feyten said. “Texas Woman’s contributes to the economic, social and cultural vitality of this community and the university enthusiastically embraces its role as a point of pride for Denton.

“This city is unique in having two fantastic universities which complement one another and make this community a special place. My gratitude to all the businesses, the chamber, the nonprofits and the amazing people who are the fabric of this city.”