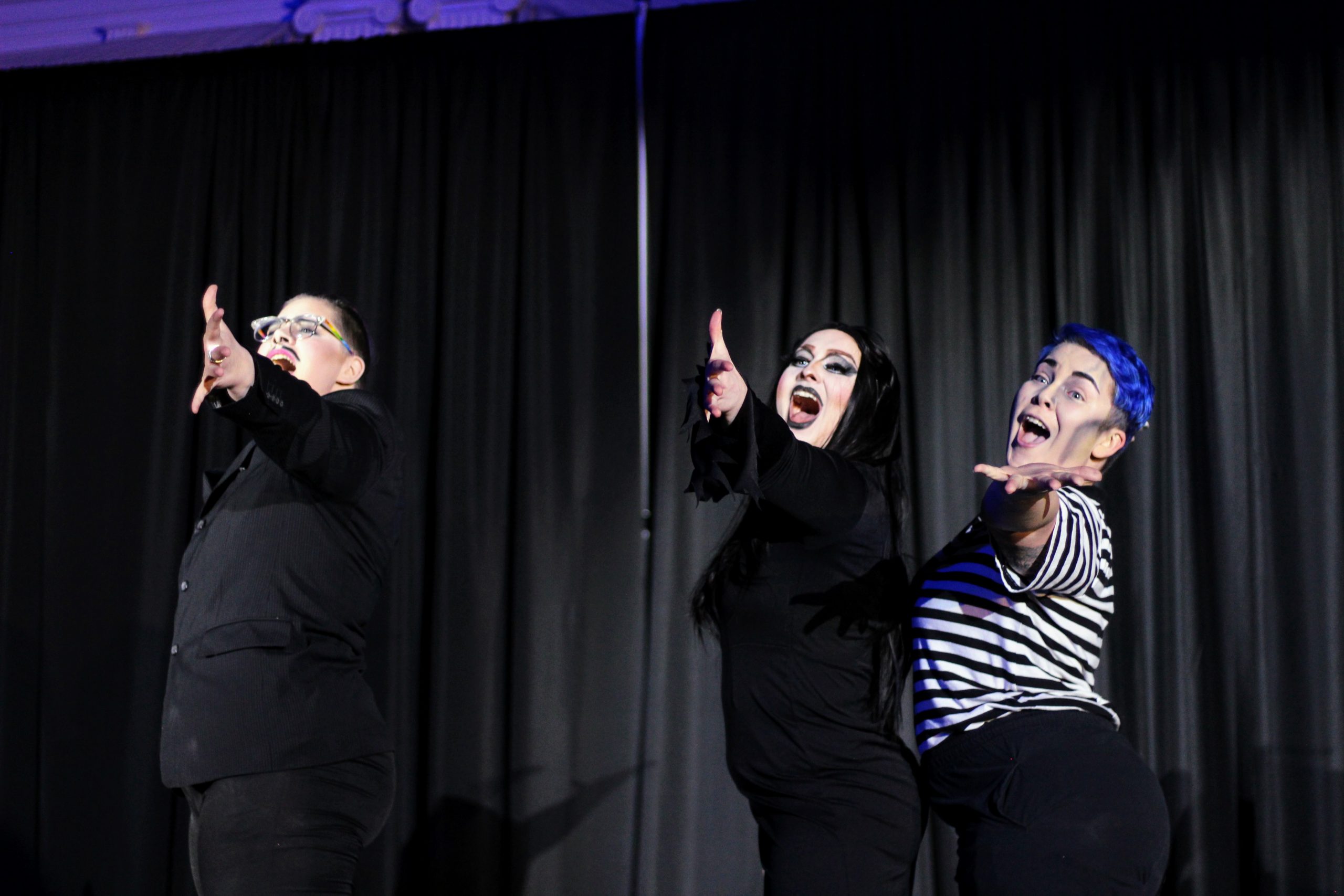 The cool, steady breeze of the night didn’t stop Texas Woman’s University students from taking the journey to Hubbard Hall for the evening’s planned activities. Ticket hand-outs were stationed in one corner of the lobby while tables for local businesses and organizations surrounded the entrances of the hall’s Southwest Ballroom.

Students waited eagerly in crooked and scattered lines for the doors of the hall’s ballroom to cast open and welcome the crowd into the annual Texas Woman’s University Kings, Queens, and Non-Binary Beings Drag Show.

Upon walking through the doors, guests were met with multicolored strobe lights and were gifted colored bandanas laid on each seat.

The drag show was accompanied by representatives of OUTreach Denton, an LGBTQA resource organization made to support and advocate for the community. The representatives went on stage to inform the audience of the organization’s mission and efforts to provide a safe space for LGBTQA individuals.

Cider, the season three winner of the drag competition show “Dragula,” gave a speech centered on empowerment speech before the show began, speaking on the validity of everybody’s identity and emphasizing the importance of being oneself.

“If anything I say offends anyone, then you’re going to have to leave,” Cider said, before sending his support out to the crowd and the performers.

Second-year nutrition major Christina Wells said that she was excited when Fatale appeared on stage.

TWU invited a total of 11 drag stars including the two hosts and performance group Mustache Envy. Most stars performed a choreographed dance or sequence over personalized music tracks. Many acts integrated messages of self- acceptance and expression within their performances, taking advantage of the inviting platform given to them.

Some entertainers like Lana Del Gay showed their personal talents. Gay gave a live opera performance before unveiling a skin-clad outfit and giving the crowd a dance performance.

Alongside the professionals was a string of student performances who followed the routine of giving choreographed presentations over selected music.

“I know they let students come on stage last year too, but I always enjoy how inclusive and open to the public the drag show is,” Leatch said. “The student who went first was really good, and I hope she can come back next year.”

Tips were encouraged throughout the show. All the money donated would go to OUTreach Denton to help support the organization. The audience participated in tipping performers as they danced on stage and offstage while they walked through the aisles on the floor.

Following the show, there was a meet and greet where those who attended the event could talk and take pictures with the featured drag kings and queens of the night. Many students like Wells said that they had a great time and hope that a majority of the kings, queens and students will be able to come back to TWU for the next drag show.

“I hope next year they can bring back some of the same performers next year because I really liked them a lot,” Wells said.