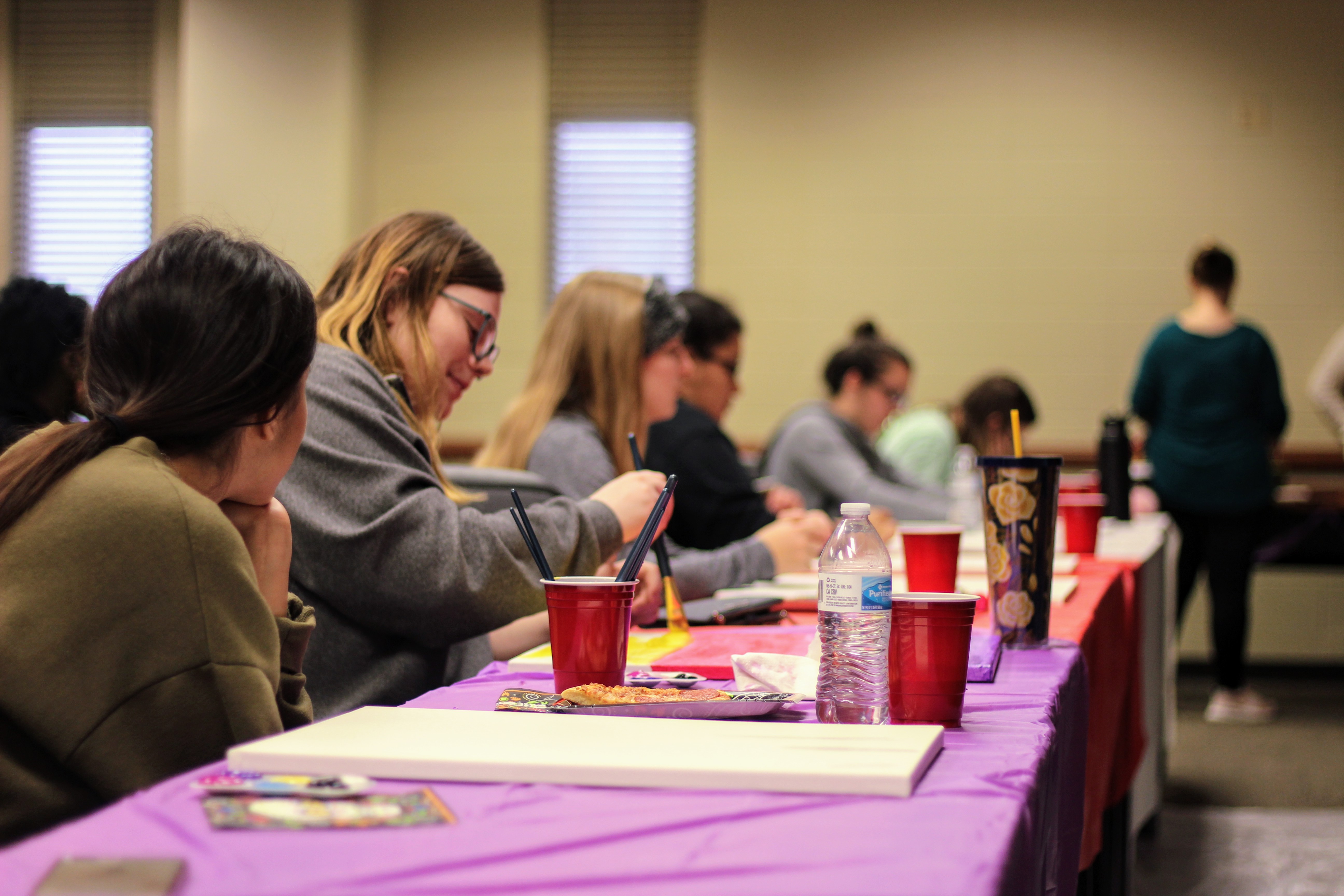 Disney’s “Coco” plays softly as members and guests of the Convention of the American Instructors of the Deaf (CAID) sit together, applying their artistic skills to create sugar skull portraits.

Subtitles mean the low volume isn’t a problem for the hearing impaired, as the group watches the film in a comfortable silence.

Texas Woman’s University’s CAID held their Day of the Dead silent painting event Wednesday in the Multipurpose and Classroom Laboratory Building to celebrate this year’s Dia de los Muertos while bringing awareness to the audibly impaired community of the Denton campus.

Attendees ate pizza and snacks while watching the Disney film. Blank canvases, paints and sugar skull stencils were available for attendees to create and design art pieces as the movie played.

CAID is a student-led organization aimed toward those who are interested in deaf culture, American Sign Language, deaf education or working with the hearing impaired in the future. The organization provides volunteer opportunities, social activities, fundraising, service projects and more based on interacting and working with the deaf community.

Reagan Stubblefield , a sophomore pre-occupational therapy major, said she found the event to be an enlightening experience.

“I really enjoyed it,” Stubblefield said. “I’ve always loved ‘Coco,’ and I’ve never actually done anything with sugar skulls before. I feel like they’re such a big part of Día de los Muertos and Mexican culture.”

Stubblefield also acknowledged the importance of recognizing different culture’s celebrations, such as Day of the Dead.

“Even if it’s not something that might not be personally applicable to you, it’s what other people believe in,” she said. “It’s great being able to celebrate times like this with other people.”

President of TWU’s CAID organization Sarah Adams said she and the officers wanted to center the silent painting events around bringing together the hearing and those with hearing impairments through common activities like movie-watching and arts and crafts.

“We wanted to put the movie on with the subtitles and the audio to try and bridge those two communities,” Adams said.

Adams said that the Convention of the American Instructors of the Deaf plan on hosting more events next semester that continue to focus on encouraging interactions between the hearing and those with hearing difficulties.

To learn more, visit them on Pioneer Engage.

Featured image: Event attendees take their seats to paint skulls and watch “CoCo” during the Convention of the American Instructors of the Deaf ‘s Day of the Dead Silent Painting at The Texas Woman’s University in Denton, Texas, Wednesday, Oct. 30, 2019. Photo by Sarah Pham.