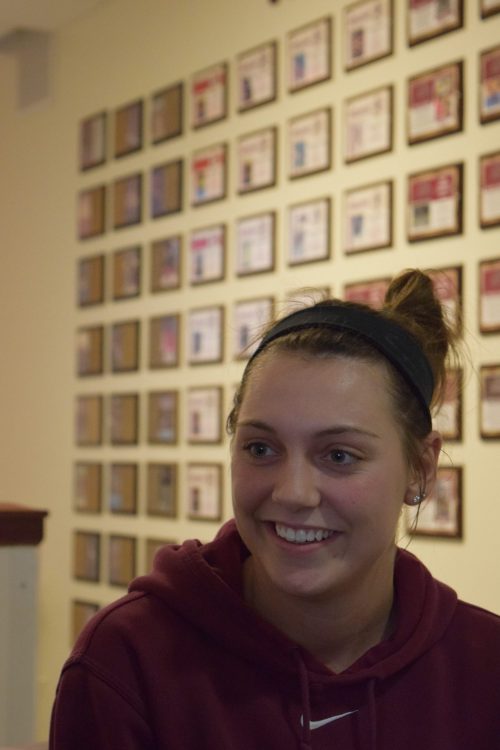 Every month, TWU Athletics recognizes one student athlete for going above and beyond in their field. For this month, the honor was given to junior health studies major Bria Northrop.

Northrop is currently a part of the TWU gymnastics team but was competing in the gymnastics world with Fuzion Gymnastics before she signed on with TWU.

Northrop was excited to have been named Athlete of the Month for February. “It’s an honor,” Northrop said, “It’s super exciting to say the least. It’s special for sure.”

Although proud to be Athlete of the Month, Northrop said that she was not expecting to be given the honor. “I was caught off guard to, to be honest,” she said. Northrop found out that she was Athlete of the Month by seeing her face associated with the title on the TWU Athletics website. Northrop said, “I was sitting there with my roommates, and then I saw it [on the website], and I was just like ah!”

Of course, Athlete of the Month is not given to just any athlete. Northrop has had successes throughout the season that earned her the title of February’s Athlete of the Month, but her proudest accomplishments occurred with the help of her team. The team competed in an invitational meet Feb. 15 in St. Charles, Missouri against Iowa State, Lindenwood and Southeast Missouri State University. Northrop admitted that the TWU gymnastics team has been struggling a bit, but the Feb.15 meet showed that they have improved. “Lindenwood is our biggest rival, and we lost by 2 tenths, which is pretty close, and that was a big step in where we are as a team,” Northrop said.

As for personal accomplishments, Northrop is most proud of the fact that she can now compete in every event again. “Last year, I was restricted basically to just bars, and by the end of the year, I got to come back out on floor because I was out due to a knee injury,” Northrop said, “So being able to come back on all four and doing that consistently well is one of my biggest accomplishments.”

Naturally, Northrop has an event that she has a particular fondness for competing in. “I like floor the best because you get to dance around,” Northrop said, “I like making eye contact with the crowd and just playing with them.” Part of Northrop’s floor routine this year features a piece from “Crazy Train,” which she said has a particular significance to her. “When I was in level six or five, I told my coach that I was going to have ‘Crazy Train’ as part of my floor music one day, so having it this year is pretty cool.”

To see Northrop in action, come see her in the team’s next home meet Mar.3 at 2 p.m. To find out more information about Northrop, visit her bio.