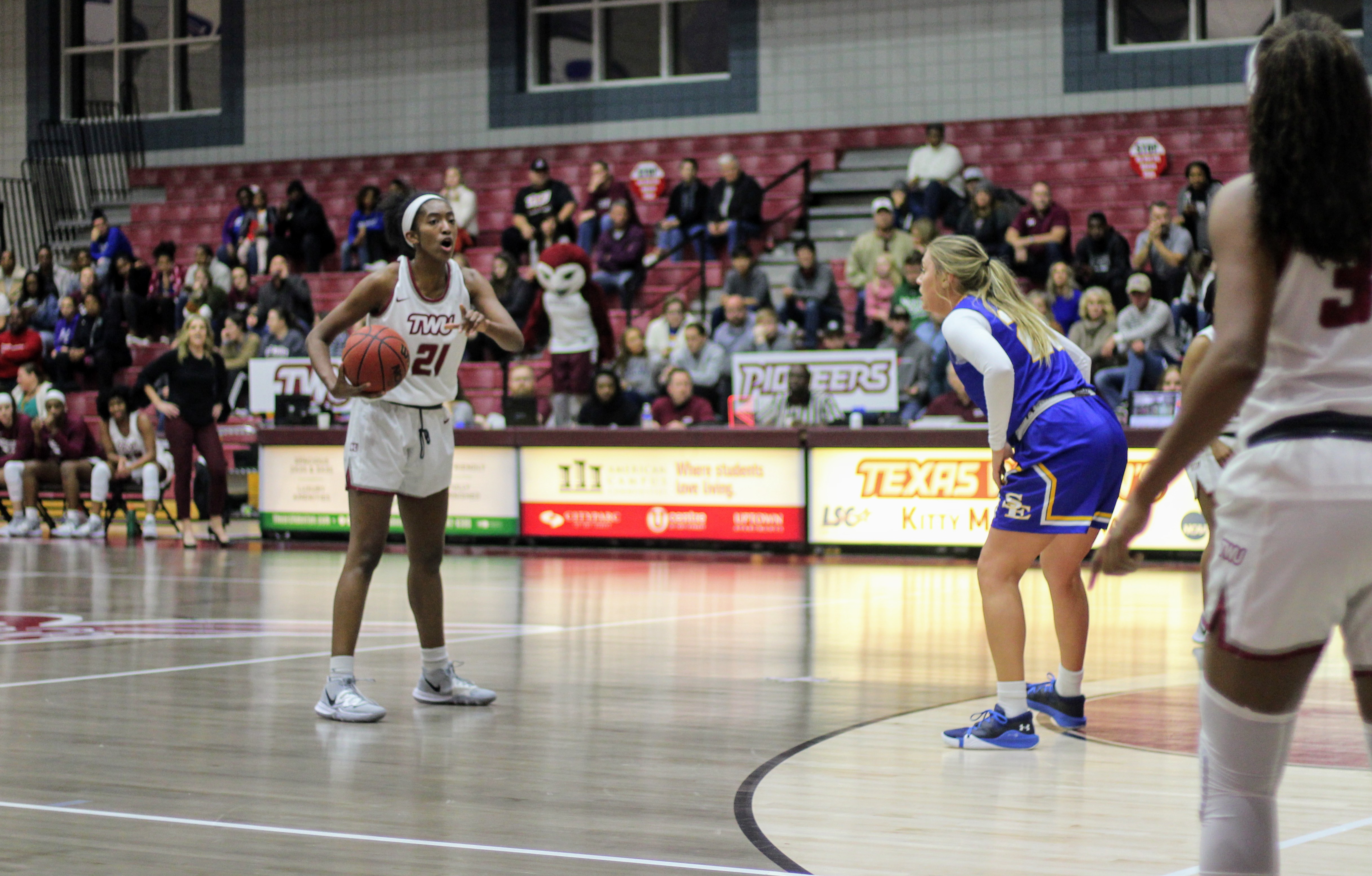 The Pioneers held their own in a hard-fought game Wednesday night, matching Southeastern Oklahoma State point-for-point into overtime, when a three-pointer in the final seconds cinched the win for Savage Storm, resulting in the Pioneers losing 59-61.

TWU faced off against Southeastern in the Kitty Magee Arena after a big win in their season opener against Champion Christian College Nov. 9. Though the Pioneers only shot 25% after the first quarter, they maintained the lead until a layup by the Savage Storm in the last four minutes of the fourth quarter tied the game 51-51.

A strong defense kept the Pioneers in the game, holding the Savage Storm to 36.4% from the floor and 24.1% from the three-point line in the second half.

“That’s a really hard team to guard because they’re so good at motion and everybody can shoot,” head coach Beth Jillson said. “I was impressed with our defensive effort and holding them to 61 points was good for us. We were really gritty and really tough, and I think we took steps forward defensively to put us in a position to win the game.”

A call for a foul came too late for the Pioneers to rebound, leaving them defeated when the final buzzer sounded.

“We were trying to foul with less than two seconds left because we still had two fouls to give,” Jillson said. “We didn’t get the call, and they made a big shot. But I loved the grit and the toughness that we played with tonight.

“We left it all on the floor.”

Senior guard Carissa Moody said the Pioneers’ attention was on halting Savage Storm’s run, but the clock ran out before they had a chance to even the score.

“Our focus really was just to get that one stop and not really worry about all the stuff that was happening in the game, but it just didn’t happen right then,” Moody said.

Despite the loss, the night saw some big successes for the Pioneers. Moody achieved her best rebounding effort yet at TWU, with 11 points and 19 rebounds during her first double-double of the season. Senior forward London Archer finished the night seven of 12 from the field with 20 points, and redshirt freshman Brielle Woods scored eight points, making two of her three attempts from beyond the arc.

The Pioneers said they don’t plan to let the early-season loss discourage them ahead of upcoming games.

The Pioneers will face Northeastern State in Tahlequah, Oklahoma, Nov. 20 as part of a five-game road trip.

Featured Image: London Archer converses with teammates on the court during a basketball game at The Texas Woman’s University Kitty Winter Magee Arena in Denton, Texas on Wednesday, Nov. 13, 2019. Photo by Sarah Pham.