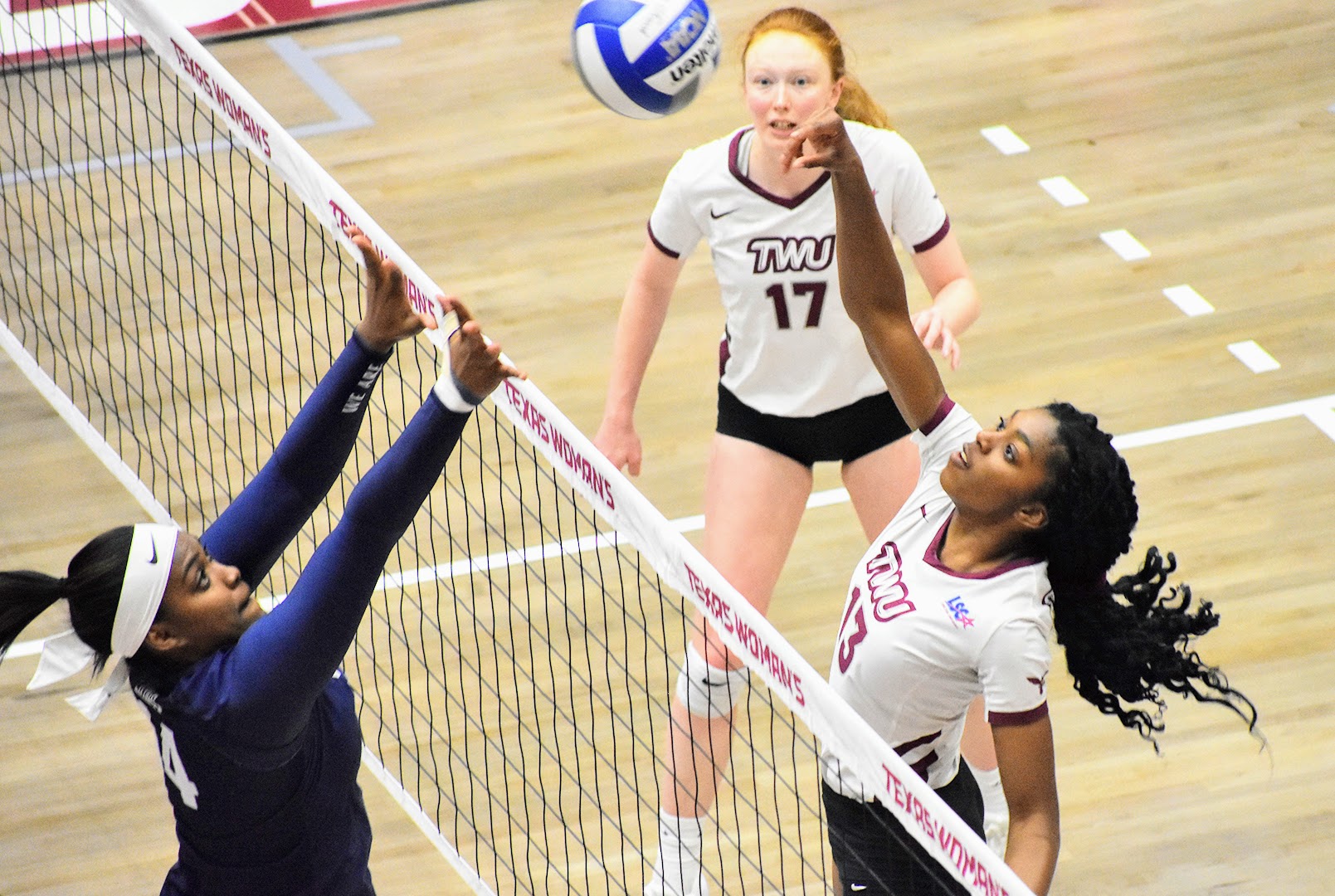 Described by her teammates as encouraging and determined, and known to her coaches as a “Jill-of-all-trades,” Texas Woman’s University’s Student-Athlete of the Month, Trixie Oche, consistently conquers the court as this year’s volleyball season nears its end.

Oche from Richardson, Texas, started playing volleyball in the seventh grade and stuck with the sport throughout high school, starting her competitive career in the tenth grade when she began her first club season. After two years on the competitive roster, Oche furthered her career and education at TWU, where she was offered a position on the team and earned a spot in the school’s kinesiology program.

“I was talking with other schools, but my most solid offer came from TWU.” Oche said. “I also really liked the coaches and staff and the health studies program here.”

After Oche’s arrival here at TWU, she made a name for herself on the team, hitting highs of 17 kills and scoring 19.5 points in this year’s season. The Pioneers’ head coach Jeff Huebner said that Oche’s performance over the past month has been “fantastic” as her focus and understanding of the game continues to improve with each passing week. He was proud to know she had earned the recognition.

Oche said she plays very much in-the-moment when on the court and doesn’t often think much about the aftermath of her efforts, so when she heard she was awarded Student-Athlete of the Month, she was slightly taken aback.

“I found out after one of my late-night practices,” Oche said. “I got an email from one of my professors saying, ‘Congratulations’ and I thought, ‘Wow, this is so cool.’”

Oche’s nonchalant reaction contrasted the excitement she felt at hearing the news that she had been recognized for efforts at doing what she loves.

In her journey thus far, Oche would occasionally come face-to-face with everyday trials. Juggling both competitive sports and academics can be a challenging task, but her self- acclaimed time-management skills are what help her organize and stay on track with her busy schedule. Oche did admit to sometimes feeling overwhelmed by her back-to-back calendars, though.

“For the most part, it doesn’t get too bad,” Oche said. “[When I’m overwhelmed] I do like to ride my bike around campus. It helps me clear my head, and when I’m finished I’m able to get back to what I was doing.”

To keep up her momentum, Oche constantly works on areas she aims to improve and perfect, such as her attacking methods. She believes there is always room for refinement, for “every day is learning day.”

Head coach Huebner said he has watched Oche’s abilities and strengths get better each season and is impressed with how far she has come.

“There’s almost no way to express the amount of work she has put in,” Huebner said. “When we recruited Trixie, she was an athlete who had a long way to go. She still has a lot to learn, but she has come much further much faster than I think anyone would have expected, and we are really excited about her.”

Huebner believes that Oche has the sportsmanship and potential to earn the position of Student-Athlete of the Month again sometime in the future.

Along with the title of this month’s student-athlete, Oche has continued to gain recognition for her performance as an athlete, recently receiving two additional titles at this year’s Lone Star Conference Awards ceremony. She took home awards for All-Lone Star Conference First Team and Academic All-Conference, the latter of which she earned for the first time in recognition of her 3.9 GPA.

During her time on the Pioneers volleyball team, Oche said she owes the entirety of her drive and motivation to her parents, who she thanks for giving her the opportunity to play volleyball, and her teammates, who endlessly encourage her to do her best.

Featured Image courtesy of Cameron Been.