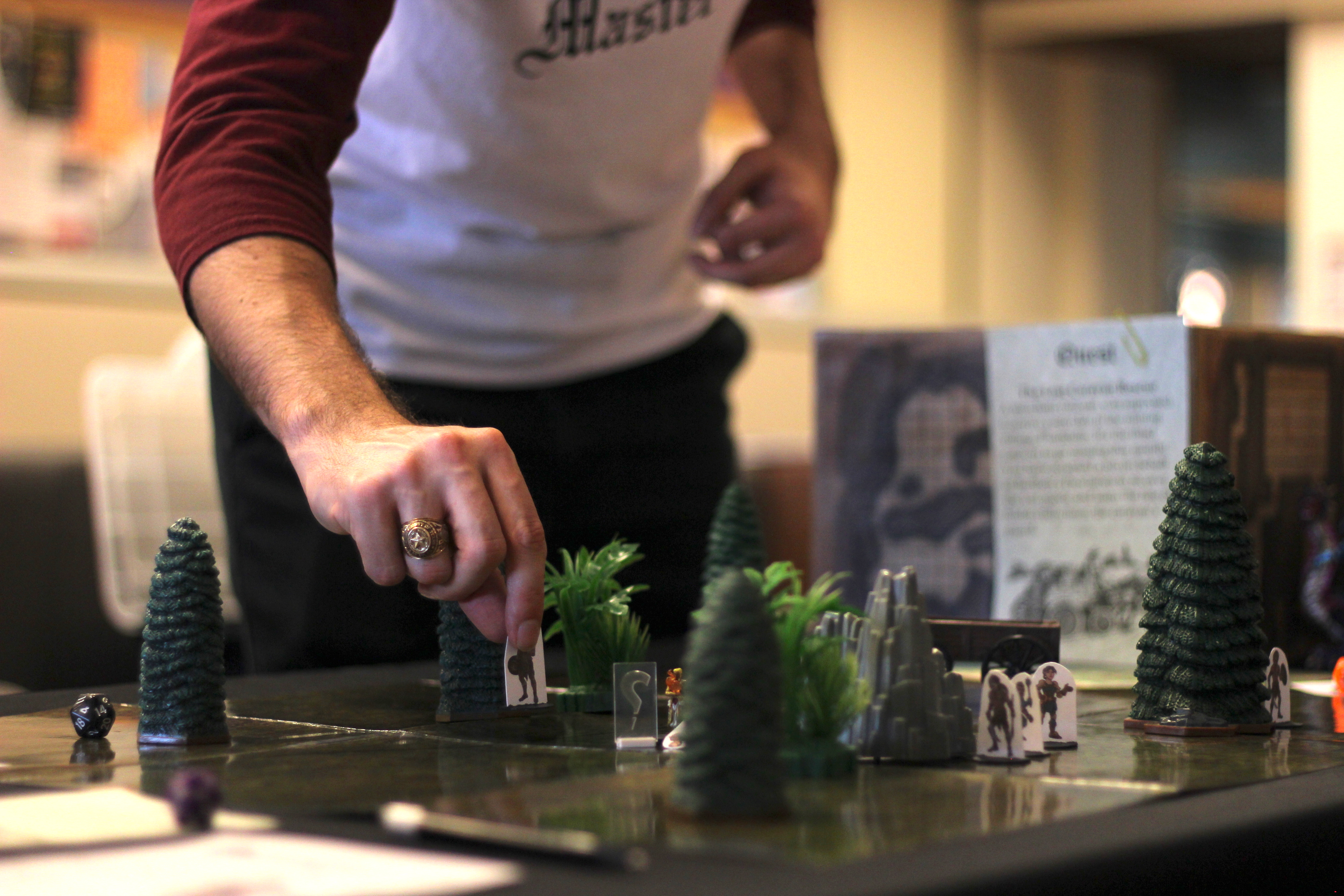 The half-empty Maroon Lobby is teeming with fresh-faced bards, mischievous warlocks and mad half-elves Wednesday evening. Whether locked in battle, foraging for gold or on the hunt for a daring quest, magical thinking fills the Texas Woman’s University Student Union with the voices of another world.

The league has already welcomed 50 members to its ranks since becoming an official organization this August. Hosting weekly and monthly sessions for players, officers hope to encourage anyone with an interest in D&D to explore what the league has to offer – and the fast-growing group is defying stereotypes about the decades-old roleplaying game.

“A lot of the [preconceptions] about D&D is that it’s played by 30-year-old men who live in their mom’s basement or something like that,” Tavi Small, computer science freshman and Adventure League vice president, said. “It’s really not, it’s for anybody.”

Thanks to the rise of nerd culture and the popularity of the Netflix hit Stranger Things – which features a pilot episode that opens with members playing D&D – players have seen a resurgence in interest in Dungeons and Dragons.

“With pop culture leaning more toward the nerdy lately, it’s like it’s brought this out of the dark and into the public eye,” League founder and president Philip Monds said. “As a result, I think a lot more people get curious, which is why I think it’s a great time to bring this club up now.”

Monds said the growing appreciation for D&D has given people permission to embrace their adventuring alter-egos.

“As it has drifted more into pop culture and the norm, it allows people who might have an interest in it but would never have pursued it ever, [to] have the chance to be like ‘well, you know, maybe,’” Monds said.

A common worry among newcomers is how to locate a group to play with, and Monds said creating the League was aimed at helping rookies find their tribe.

“When I was younger, I had heard of D&D but had no way to play a game until one of my friends approached me and was like ‘Let’s play Dungeons and Dragons – I don’t know anything about it, but let’s figure it out,’” Monds said. “Not everybody has that opportunity, and Dungeons and Dragons is an incredibly fun game for people to connect, have a great time and explore whatever fantasy world that the DM provides. Everyone deserves an opportunity to get to experience that.”

That experience of a lack of access has rung true among League members and the wider TWU community, with would-be adventurers searching for a path into the D&D world.

“A couple of years ago I kind of got interested in it, but I didn’t know anybody around me played it,” Kendrick McAdams, a computer science freshman considering joining the League, said. “Especially since I came from a small school and a small town, there’s like nobody who played it. I kind of just listened to podcasts and I’ve been wanting to get into it, and here’s a perfect opportunity since we’ve got a club.”

Longtime players say community is a prevailing factor in D&D. While console and online games often center around solo or remote-group play, D&D offers a primarily personal, stripped-down gameplay experience. With only a handful of dice, a rulebook and a few printed character sheets, imagination and comradery are the prevailing tools players find themselves reaching for – and ones they most enjoy using.

“I think what separates Dungeons and Dragons from other just regular board games is you create a special connection with your character because you make it,” Monds said. “You have this vision for what they are, and you make it come to life. In Clue, you’re just Colonel Mustard – what does that mean?

“Here, you make your character and put a lot of effort and thought into it, and it becomes something you really cherish.”

The improvisation of sessions means the game and the characters are ever evolving. With player reactions sparking new quests and triggering cataclysmic plot twists, D&D is a choose-your-own-adventure novel come to life.

“As a player, I know sometimes we do things the DM totally wasn’t expecting so the story kind of is derailed a bit,” Jailen Robinson, Adventure League member and interdisciplinary studies senior, said. “You have to be prepared for that. Sometimes characters do really random things that you weren’t expecting and you’re like ‘OK, well this spirals a whole new set of chain reactions.’”

For many, D&D’s appeal lies in the ability to take charge of their character’s fate, giving players a voice in their own narrative in ways everyday life doesn’t.

“D&D allows you to escape and try something new [by] imagining yourself in the shoes of some brave adventurer,” Small said. “You can become anyone – you can do anything.”

“It brings out the humanity in people,” Small said.

To learn more about the D&D Adventurers League, reach them on Pioneer Engage.

Featured image: A Dungeon Master places a game piece onto a board during a Dungeons and Dragons meet up at the Texas Woman’s University Brackenridge Student Union in Denton, Texas Wednesday, 25 Sept., 2019. Photo by Sarah Pham.