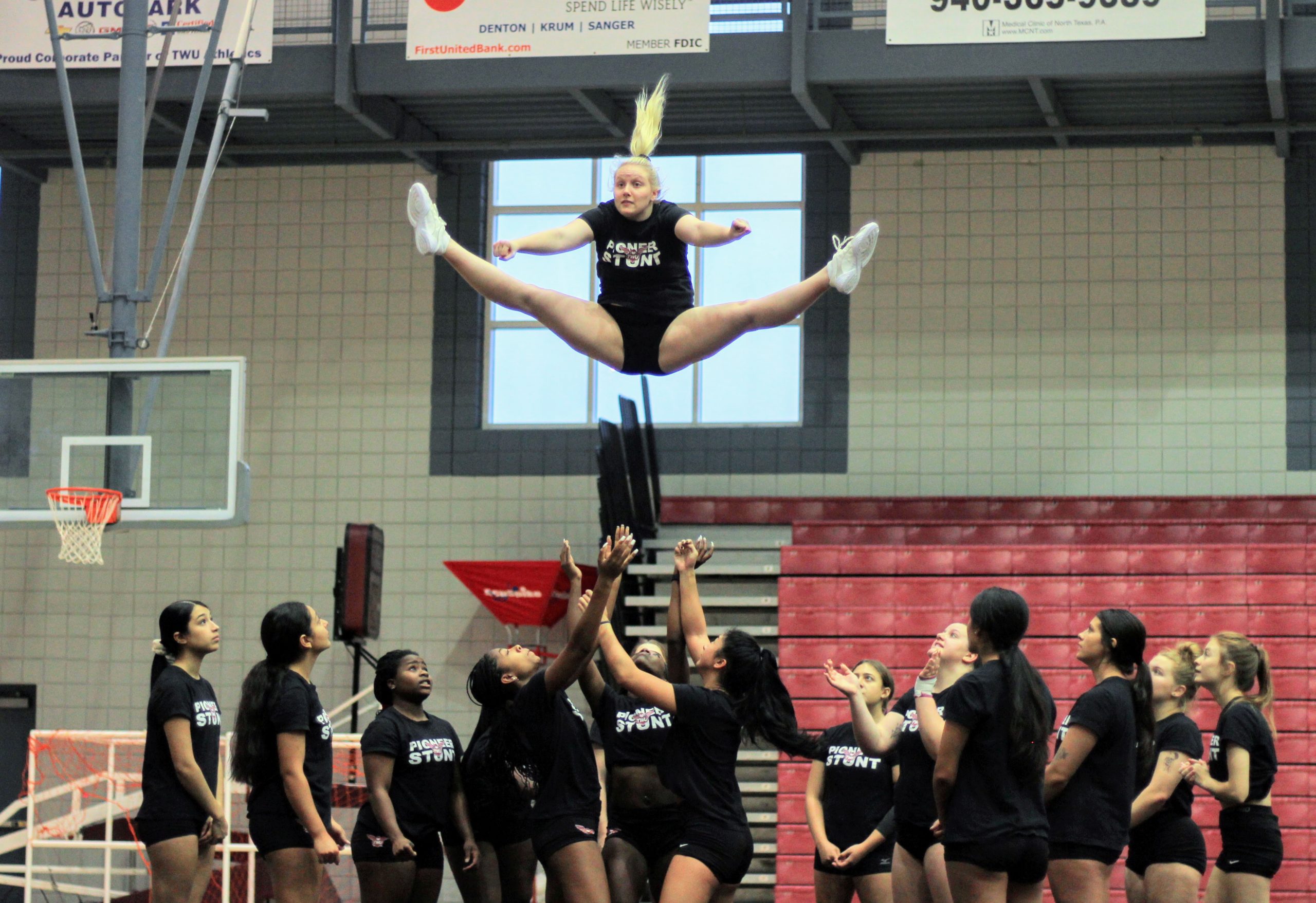 New STUNT team navigates their way through their first year

In the beginning, cheerleading was an all-male sport characterized by a combination of gymnastics, stunts and crowd leadership, and even helped launch the careers of presidents Dwight D. Eisenhower, Franklin Roosevelt and Ronald Reagan. Now, with more than four million cheerleaders around the globe, the sport has a reputation comparable to Texas Woman’s University: one that celebrates women.

STUNT, described on their website as the fastest growing female sport in the country, ushers in a new opportunity for female athletes at the largest university primarily for women in the United States. Through trials and tribulations, the TWU STUNT team remains devoted toward navigating their first year of the program.

STUNT is a sport that focuses on the technical and athletic aspects of cheerleading, including partner stunts, pyramids, basket tosses, group jumps and tumbling. In competition, these teams perform short routines head-to-head, with the highest-scoring team advancing to the next round. The emerging sport has been named a National Collegiate Athletic Association Emerging Sport for Women.

USA Cheer created a STUNT program to develop opportunities for colleges and universities to meet Title IX requirements of a sport and to increase participation of women in collegiate sports. Jasmine Owens was named the inaugural head coach of TWU’s team Dec. 23, 2020, and the budding program announced its first recruits Mar. 30, 2021. The team joins other Lone Star Conference STUNT teams such as the University of Texas at Tyler, Dallas Baptist University and St. Mary’s University to compete this spring.

“I mean, working at a school that is predominantly female and taking on this up-and-coming female sport, I don’t think there’s really a better place to do it than TWU, ” Owens said. “It really sounded like it would be a match made in heaven.”

TWU’s dedication to having a STUNT team drew her in to work here, Owens said. The athletics department and the campus in general has been very supportive, and she said that there is a lot of excitement for STUNT to perform this upcoming season.

“I knew that there was going to be a tight recruiting window period, but then adding COVID-19 on top of that, it definitely made things a little bit more uniquely challenging,” Owens said.

The journey towards creating this team has not been an easy one, Owens said. She said that even for the prospective recruits that could attend campus tours, it was harder to get the feel of campus since it was so empty. Owens hopes that with this upcoming year, she will be able to visit more local high schools and events.

One such recruiting event this year was the USA Cheer College Cheerleading and STUNT Combine hosted at TWU Oct. 9, where TWU hosted over 20 colleges and universities. This event is a way for in-state and out-of-state coaches to recruit potential athletes for collegiate programs.

For first-year recruit Laurel Jones, cheer was a prominent part of her life, having been a three-time National Cheerleaders Association all-American in high school and being named one of two recipients of the 2021 NCA Go Be Great Scholarship. Jones said that Owens reached out to her through social media, and Jones agreed to then have an online meeting with her. After sending in a tryout video with varying skills, Owens offered Jones a spot on the team.

“I had the mindset before getting this opportunity that I really wasn’t going to get to continue to do what I love, so I take every day as a blessing,” Jones said. “I’m so grateful for getting an opportunity to continue doing what I love with so many amazing and hardworking people.”

For the upcoming season, Owens is thrilled for the girls of the team to get a better understanding of the gameplay and what it’s like to be in a STUNT tournament atmosphere, she said. Despite the team having extensive gymnastics and sideline cheerleading experience, only one member of the team has experience with STUNT, so the growth the team will have in their first season is something that Owens said she is excited about.

For the STUNT program, community service is also incredibly important, Owens said. The STUNT team has volunteered at a 5K and the mobile food pantry this semester. For their upcoming service event, they will be attending a local youth cheerleading group for their end-of-year party and educate them on the opportunities at the collegiate level for cheerleading.

“GPA is something we take really seriously too,” Owens said. “It’s something really important and being a student athlete, just like the name says, being a student is always going to be number one priority, and athletics will always take second after that.”

When talking with the other athletics coaches and the athletic director, Owens noticed the  expectation for academic excellence among athletic teams at TWU that she wants to follow, she said. As a student athlete in the Honors Scholars Program, Jones said that it can be difficult to balance everything, but she’s always been someone that has loved staying busy and working hard.

“I am just hoping to get through a game and be happy with ourselves,” Jones said. “Honestly this was a growing and learning year. We’re all working really hard, and I want us to be proud with everything we put on the mat.”

The TWU STUNT team will have their first tournament Feb. 5, 2022 at the TWU campus.

If you are a student that is interested in joining the STUNT team for the 2022-2023 school year and you have gymnastics or cheerleading experience, contact Jasmine Owens at jowens16@twu.edu.