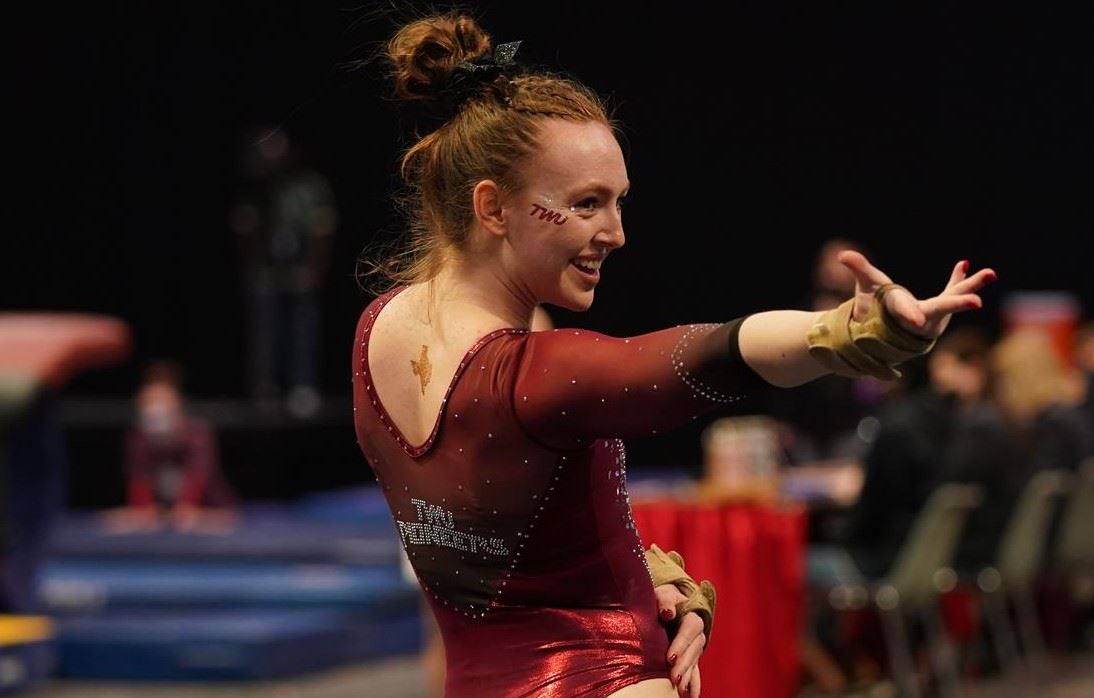 The Texas Woman’s University gymnastics team finished in fourth place at their final competition of the season in Cape Cape Girardeau, Missouri.

The Pioneers scored a 193.70 at the USA Gymnastics National Team Championships April 10, against rival teams Southeast Missouri, Lindenwood, Air Force and Centenary College. Southeast Missouri captured first place with a 195.025 with Lindenwood following behind scoring a 194.875. TWU finished just behind Air Force’s score of a 194.400 and Centenary College fell behind, scoring a 190.875.

TWU opened up the competition starting on bars. Sophomore Maddie Griffith received the highest score for the Pioneers turning in a 9.75 and she qualified for the next day’s individual finals. Freshman Steeling King followed Griffith’s lead coming in with a score of 9.675. The team’s total score for bars was a 47.150.

After a rocky start on beam, King scored a career-high 9.875 that tied for third place. Freshman Madeline Gose shadowed King’s score, receiving a 9.85 with Sophomore Alix Pierce right behind with a 9.825. The Pioneers finished with a total of 48.475.

The Pioneers put up their best scores on the floor exercise. Junior Isabel Goyco started the team with a winning score of 9.925. Gose followed close behind Gyoco scoring a 9.90, tying for second. Pierce tied for fourth place with a 9.850 and Sophomore Daisy Woodring next with a 9.825. Goyco, Gose and Pierce set new career-highs while Woodring matched her career-high. The team’s highest event score for the night was 49.275.

Closing out on vault, Gose led the way with a 9.825 tying for second place. Sophomore Mara Johnson and Griffith posted new career-high scoring a 9.80. The Pioneers scored a total of 48.80 for vault.

“After all that has happened this past year, we were grateful for the opportunity to compete at this championship,” head coach Lisa Bowerman said in a news release. “We had too many mistakes today on bars and beam but saw some bright spots in our line-ups among some of our returners who we know will use this experience to make us even stronger next year.”

The next day’s competition was for individuals that qualified from the previous day’s team competition.

Gose claimed first place with a career-high on vault receiving a 9.8625, with Johnson just behind her with a 9.725, tying for fifth. Griffith was TWU’s lone competitor on bars for the day and received a 9.8625, coming in at second place.

Gose placed a three-way tie on beam with a 9.85, with King following her score receiving a 9.825, taking fifth place. Goyco tied her career-high 9.925 on floor, winning the event and Gose tied for second on floor with a 9.875.

“I am so proud of every individual who competed today. They represented for our team incredibly well,” Bowerman said in a news release. “It’s exciting to be bringing two individual titles back to Denton.”

Freshman Lexi Leake finished her first season with the Pioneers with great memories. She said her most memorable competition was at Centenary College when the team received their season-high with a 195.15.

“We had super high energy and confidence going into the competition,” Leake said. “My first nationals here at TWU was such a great experience! Although the outcome was not as planned, we fought until the end and so many lessons were learned in the process.”

The Pioneer gymnastics team will now train until next season comes around in January.